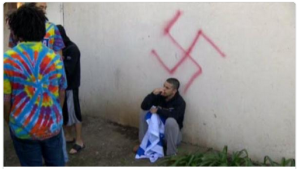 The University of California’s unanimous and historic condemnation of “anti-Semitism and anti-Semitic forms of anti-Zionism” has sparked a fierce national debate. Is anti-Zionism anti-Semitic?

There are those who believe anti-Zionism is unquestionably anti-Semitic. In that camp are President Obama, Pope Francis, and the French and British prime ministers. Hillary Clinton, John Kasich, Ted Cruz, Donald Trump and Bernie Sanders have all recently acknowledged anti-Semitism is undoubtedly a factor in the Boycott, Divestment and Sanctions (BDS) movement, the largest anti-Zionist movement on campus. U.S. Senator Cory Booker, many Latin American and Caribbean lawmakers, British Justice Minister Michael Grove and German Foreign Minister Frank-Walter Steinmeier also echoed similar condemnations of BDS as inherently anti-Semitic. There are others who argue anti-Zionism is political speech, and that one can oppose the idea of a Jewish state without being anti-Jewish.

Regardless of one’s point of view on anti-Zionism, one thing has become abundantly clear: Jewish students are caught in the crossfire.

The University of California is a case in point. A Jewish member of the UC Santa Cruz student government was warned to “abstain” from voting on an anti-Israel divestment resolution because of his presumed “Jewish agenda.” A Jewish student running for office at UCLA was questioned about her eligibility by pro-BDS students simply because of her religion. At UC Davis, swastikas were spray-painted on a Jewish fraternity house days after its members spoke out in support of Israel. At UC Santa Barbara, flyers were circulated blaming Israelis and Jews for 9/11. Three UC campuses were vandalized with anti-Semitic graffiti following fierce BDS campaigns.

While UC, CUNY, Vassar, Oberlin and Northwestern have dominated headlines of late, the alarming rise of campus anti-Semitism and its direct ties to anti-Zionist activity is a problem from coast to coast.

Jewish students have become victims in the often-hostile anti-Zionist movement on campus. In 2015, 70 percent of the top 100 schools in terms of Jewish enrollment played host to anti-Semitic incidents. And the prevalence of anti-Zionist activities and student groups and faculty who endorse a boycott of Israel were the strongest predictors of anti-Semitism.

Far too often, anti-Zionist activists have singled out, harassed, intimidated and even assaulted Jewish students, regardless of how they feel about Israel. BDS demonstrations and campaigns are often laced with centuries-old, classic anti-Semitic stereotypes.

Contrary to the false and self-serving spin propagated by promoters of anti-Zionism on campus, according to the author of the amended language, UC’s action was not intended to dilute the original version, but rather to clarify and strengthen it by distinguishing between legitimate criticism of Israel and expression that crosses the line into anti-Semitism. In so doing, the regents were able to kill two birds with one stone: they assured the university community that debate and discussion about Israel are welcomed and encouraged, and they acknowledged, for the first time, the plight of Jewish students and the prominent role anti-Zionism, particularly BDS, has played in fomenting anti-Jewish bigotry.

The amended language itself requires clarification. When, exactly, does criticism of Israel become anti-Semitism? Although the regents could have included in their report a hat-tip to the U.S. State Department for its definition, which clearly identifies when Israel-related expression crosses the line into anti-Semitism, they instead chose to draft a more aspirational statement, whose interpretation and implementation will be carried out on each campus. The regents have rightly set the stage for this inevitable next step.

As the new Secretary takes the reigns at the Department of Education it is important to take notice of what one of our nation’s largest and most prestigious university systems just did.

This conversation on when political speech enters the abyss of anti-Semitism will and must continue, for the sake of Jewish students across the country.

Tammi Rossman-Benjamin is faculty at the University of California and director of AMCHA Initiative, a non-profit that combats anti-Semitism on college campuses.