Author Robert Reilly’s latest book, “Making Gay Okay: How Rationalizing Homosexual Behavior is Changing Everything,” dissects the homosexual movement’s strategy of indoctrinating Americans on the pros (but not cons) of LGBT behavior. 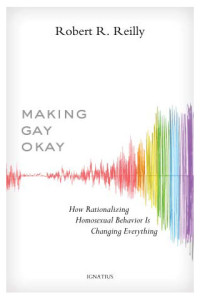 The new norm of sexual behavior is “if you rationalize my sexual misbehavior, I’ll rationalize yours” as well. This goes against the natural law of man, which were recognized by ancient Greeks. Even the Greeks believed that a mentor-mentee relationship should be platonic between a wiser, older man and a younger man seeking wisdom, which iscontrary to the modernmedia’s perception of Greek culture. Those who disobeyed the natural law were punished.

Marriage, contends Reilly, fulfills natural law. Without marriage of opposite sex couples, there is little-to-no future of the state or society. Homosexual, or same-sex, marriages are naturally sterile and would have to rely on adoption or other individuals for children and offspring. In his words, “same-sex relationships exchange this potency [i.e. having children] for impotency.” By not recognizing the value of traditional marriage and gender roles, it becomes “a denial of humanity, of what [it] is.” Rationalizing homosexual behavior as normal is, says Reilly, “robbing the word Nature of its meaning.”

The dissolution of the family and the sterility of same-sex families will create a more government-dependent American society, warns Reilly. The campaign team for President Obama used a graphic known as “The Life of Julia,” where a woman depends on the government for her livelihood and where “family is practically nowhere present.” This paints “government dependence and family absence as a success, rather than as a warning.” As MSNBC anchor Melissa Harris-Perry said, in supporting this government-dependent view, “We have to break through our kind of private idea that kids belong to their parents or kids belong to their families, and recognize that kids belong to their communities.”

“Thus rationalizations become an engine for revolutionary change that will affect society as a whole…If you are going to center your public life on the private act of sodomy, you had better transform sodomy into a highly moral act. If sodomy is a moral disorder, it cannot be legitimately advanced on the legal or civil level.”

Reilly goes on to say that this leads to other implications, by abandoning one standard that affects others:

The issue surrounding HIV and AIDS has ignored the problems of homosexual behavior. Instead of focusing on how homosexuality increases the risks of contracting HIV and/or AIDS, the gay community has portrayed themselves as victims. For example, the Center for Disease Control and Prevention’s (CDC) National Center for HIV/AIDS found “94.9% of HIV diagnoses [were] among teenage boys” and 94.1% of young men between 20 to 24 years old were a result of homosexual sex. “By this rationalization, homosexuals are victims, not perpetrators,” said Reilly, and “likewise, homosexuals are not responsible for the contraction or the spread of AIDS; they are its victims.” This has led to an incredible amount of research money geared towards AIDS research. Reilly asks whether those who smoke and contract lung cancer should blame researchers for not doing more to raise funds for lung cancer research, which is what the gay community and gay lobby do.

Adding to that, homosexual fidelity is far below that of heterosexual couples who are married. Homosexual marriage advocates contend that their relationships are stable, when studies have shown quite the opposite. “Of 156 couples studied, only seven had maintained sexual fidelity; of the hundred couples that had been together for more than five years, none had been able to maintain sexual fidelity.” Compared to married heterosexual couples, “94% of married people…had only one partner in the prior year” and “were 41 times more likely to be monogamous than homosexual couples.” A University of Chicago study in 2004 found that 42.9% of gay men in the city’s Shoreland area had more than 60 sexual partners and 55% of Chicago gay men in that area have “at least one sexually transmitted disease.” Research suggests that homosexual activity hurts an individuals’ health in the long term, reducing life expectancy, increasing the chance of sexually-transmitted diseases as well as an increase in the likelihood of contracting AIDS or HIV.

Obama and his vice president Joe Biden “openly espouse” same-sex marriage “because they first embraced the larger view of reality of which the rationalization is only a part.” They have evolved on the position, says Reilly, but he sees it as “devolving.” He asks, “What is the object of marriage?” He says it is “for two to become “one flesh”.” The same-sex argument of “love” goes against “real love,” argues Reilly, because “real love always seeks the well-being of the loved one…to sexualize the love in these relationships would be profoundly mistaken because none of these loving relationships is or could be spousal in character.” Not all love is sexual, posits Reilly, and should not have to be sexual in nature. In his ideological battle, Reilly points out that Obama “is changing the rules so that those who are not following them can have their own special set of rules.” By espousing equality before and under law, Obama “subverts equality before the law.”

Reilly quotes Obama, pointing out how Obama commonly uses “I”, “me” and “I’ve” to denote a unilateral, executive tone that infers what he deems important should be “the standard by which to judge what is right and wrong.” Obama’s “Church of Nada” encourages the belief that, “if you would like your moral misbehavior to be rationalized, you should be willing to rationalize the moral misbehavior of other. That is only fair play…this is Obama’s new golden rule.”

The implications of homosexual marriage’s advances are not encouraging, because polygamists are eager to promote how their love requires equal protection under law. To illustrate that point, among other important reasons, Reilly methodically walks through court cases that have led to the current situation of traditional marriage losing ground to same-sex marriage, from the Casey decision to the most recent Windsor decision. If the gays are now a protected class, asks Reilly, then what would prevent alcoholics, polygamists and other people from declaring the same claims in a courtroom?

Academia and college institutions in general have jumped on the homosexual agenda bandwagon and have created centers of study and courses on LGBT issues. The University of Maryland has a Lesbian, Gay, Bisexual, and Transgender Studies program and has eighteen undergraduate courses (nine of which are electives) and two graduate-level courses. Reilly lists other universities that have majors, minors, certificates and concentrations in LGBT studies such as Wesleyan, Ohio State, Stanford,North Carolina-Chapel Hill, Brandeis, Washington State, Duke, Miami University of Ohio and DePaul. 43% of Catholic universities and colleges in the U.S. “recognized student clubs that favor the homosexual agenda,” Reilly finds.