As the impeachment trial in the Senate continued through the week, multiple hyperbolic statements were made not only in the Senate trial, but on television panels and discussions. One such hyperbolic remark was made by a MSNBC legal analyst Maya Wiley. Wiley also works as a professor at The New School, a New York City-based university which offers courses on design, liberal arts, performing arts, and graduate schools. 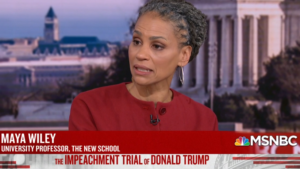 Wiley was on an MSNBC panel to discuss the impeachment trial and she told her fellow panelists that the Senate trial is about “a murder conspiracy and the victim here is the Constitution.” It was a quite outrageous statement, considering that murder trials in the United States adhere to a fair trial and due process. According to President Donald Trump’s legal team and many of his supporters, Trump has received neither in the House of Representatives’ impeachment proceedings and party-line, partisan impeachment votes on two articles of impeachment. Wiley ignored this important context in making her hyperbolic claim.

Her online biography noted that she is a “nationally renowned expert on racial justice and equity” and had previously served under Democratic New York City Mayor Bill DeBlasio as a counsel. While working for DeBlasio, she was in charge of expanding affordable broadband access across the city while pushing for human rights and gender equity. Wiley received her J.D. from the Columbia University School of Law.

If anything, her biography illustrated her liberal leanings and progressive advocacy.

But without proof or evidence, Wiley’s claim falls short of being a valid claim. As a professor, she should be more careful before making outlandish, unproven claims in the public eye.