Home Perspectives Marco Rubio on A World Without American Engagement 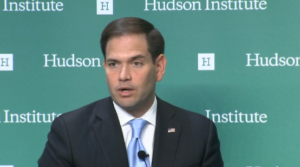 image via screenshot from NBC News

On Tuesday at the Hudson Institute, Senator Marco Rubio reported about his recent trip to Qatar, Iraq, and Turkey to discuss the importance of American engagement in the Middle East and the consequences America would encounter if it pulled out.

Senator Rubio explained why America has a serious interest in what happens in the Middle East. “Whenever there are vacuums of instability… that vacuum is filled with radicals… We do not want ungoverned, chaotic spaces in the world where terrorist organizations can train people, raise money, control territory, and use it to plot attacks against us and other places around the world.”

He concluded that Syria will continue to be unstable if Syrian President Bashar Assad continues to be in control. Senator Rubio said, “There is no way these people will be governed by him, when someone kills your father, your mother, your children, and forces you to leave, there is no way you are going to accept that person’s political legitimacy.”

While in Iraq, he met with many Iraqi Christians who want to return to their homes. He said that although there has to be a role from the inside-out, America must be involved now to ensure that Iraq does not become a “puppet state” of Iran.

According to Rubio, “It’s a lot easier to say let’s walk away than to explain what would happen if you didn’t.” He understands that the media covers stories for ratings, but he feels that it does a disservice to focus primarily on the “horse race” and not the issues.