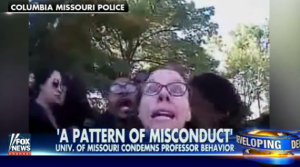 The American Association of University Professors (AAUP) voted unanimously Saturday to place Mizzou on its censure list, a warning to potential faculty members that the AAUP cannot guarantee academic freedom or due process at an institution.

This comes after an investigation launched by the AAUP in March found that Melissa Click was fired because of political pressure, largely because of the state legislature.

Click was seen on video calling for muscle to remove a student journalist from a protest camp set up by members of Concerned Student 1950 last fall. She also grabbed the student’s camera and mocked him while escorting him out of the camp.