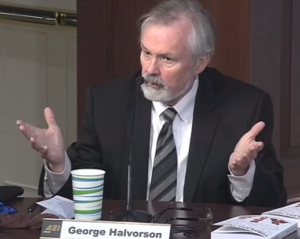 Halvorson avers that the “number one predictor for who is going to be in prison at age 18 is the number of words in their vocabulary in kindergarten.” He lamented that there are “far too many people in prisons in this country” and of the incarcerated population, “60% of the people in our prisons can’t read.” He noted, “85% of the kids in the juvenile justice system even read poorly or can’t read at all.” Halvorson then claimed, “You cannot close the learning gap at 15 years. You have to close them at 15 months.”

The main reasoning behind this pre-K education push from Halvorson is that he believed, “The brains develop in every child in the first three years of life.” He said, “The brains that don’t get that exercise, don’t build that connection.” In his mind, “The brain starts pruning itself” at age four and he thought starting this at “kindergarten is too late.” Halvorson said that if children do not learn words early and at a kindergarten age, they “don’t catch up” later in life.

He compared it to breakthroughs in medicine, where doctors and researchers “changed the outcome for strokes” by looking at prevention rather than treatment and “going upstream” in the treatment process. Halvorson admitted that the parents must be involved for this to work, “This has to be a parent-involved, parent-based process.”

Adding to that, Halvorson spoke briefly on “Medicaid mothers,” or women who have children and are on the Medicaid rolls. He noted, “51% of the births [in this country] are to Medicaid mothers.” “Almost no mothers,” he said, “know they can exercise their children’s brains.” The average number of hours read to one’s infant and newborn? “Average of under 30 hours” for “Medicaid mothers” and 1,500 hours for mothers not on Medicaid.

For “Medicaid mothers,” it’s “a birthright thing,” where people are predisposed to intelligence and do not need brain stimulation, Halvorson claimed. But, he believed, “When you exercise a brain in the first years, the brain grows incredibly [and] tremendously.” He concluded, “We have failed miserably as a country by not teaching that to every single parent.”

Pepper agreed with Halvorson’s assessment of pre-K education and “Medicaid mothers,” and said this is why “it really matters” since it affects America’s future generations. He spoke of the ESI Test, which is the Early Screening Inventory test to measure a child’s development, and that in the U.S., “less than 10% of the children in federally subsidized programs test the highest in the world.” In contrast, Pepper said, “75% of kids [who] aren’t federally subsidized…[have] the lowest [scores] of any developed country in the world.”

He cited China as a great example because of their “command structure” in implementing more pre-K education across the country, which means that up to 70% of China’s children will receive this curriculum. In the U.S., “only a quarter of children are getting [this education],” lamented Pepper. He said, “The urgency is way too clear and it’s taking far too long” because this is “our social, moral and economic imperative of our generation.” Pepper compared it to post-terrorism responses, where people are united in a cause, asked the audience to act on it and be more unified about pre-K education.

Not mentioned was Halvorson’s current position as the Chair and CEO of the Institute for InterGroup Understanding, an organization dedicated to “issues of racism, prejudice, discrimination, misogyny, and InterGroup stress and conflict.” Halvorson is also the chair of the state of California’s First 5 Commission for Children and Families, where he was appointed by current California Governor Jerry Brown to a four-year term that expires in 2017.  The commission “uses roughly $500 million each year — raised from tobacco taxes — to provide support and education to children in California from birth to 5 years old.” Halvorson’s other notable roles are membership of the Right Start Commission for Children for the State of California, an advisory council member for the Too Small To Fail Commission, and member of the CEO Advisory Council for the Ready Nation coalition.

To find out how permanent those gains in early education are, click here.