At the Heritage Foundation recently, several voices against radical Islam and extreme Islamist ideology stood as a stark contrast to the spokesmen represented in the typical 24-hour news cycle. Naser Khader, a member of parliament in Denmark and of the Conservative People’s Party, spoke about stopping radical Islam’s spread, while Farahnaz Ispahani, former Pakistani parliament member and author, highlighted the inequality issues within this strain of radical Islam. 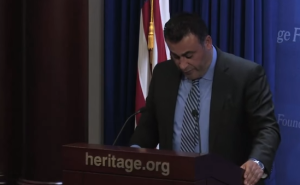 Khader said, “I went to the Middle East right after the Paris attacks, hoping to meet an outcry of condemnation of what happened in Paris, but I didn’t.” Much of the sentiment and opinion heard on his trip was, “Now the West can test its own medicine” and Khader said, “I heard different conspiracy theories of how the West did these terrorist attacks” in order to have “an excuse in order for the West to get involved in Arab affairs.”

He continued, “The reaction in the Arab world and the following debate…on the jihadist ideology has yet again made it crystal clear why Islam needs a reformation or a revolution.” Khader slammed political correctness, “[They who] insist on calling the Islamic State by the nickname, ‘Daesh’…because it has no connection with Islam.” He said, “When people try to disconnect Islam from the violence, the wheels come off.” Khader pointed out, “The religion is what the religious make of it.” It is not a matter of political correctness, but Khader said, “This is a dogma within religious parties” and “we cannot say that the Islamic State are not Muslims, that is what they call themselves, as they enslave, murder and massacre with a Koran in their hands.” By using names like Daesh, Khader elaborated, “You reduce the terrorist to no more than a game with weapons, but they are much more than that, they govern an area the size of Great Britain.” He added, “All of it is built on a version of Islam.”

Khader said, “Let’s get rid of this political correctness and grab the evil by the root,” and “It is about time that Islam undergoes a Reformation.” He gave an example for the audience, in which he said, “I usually compare Islam and Christianity with two houses.” “Today,” Khader said, “Christianity is a wonderful house” full of free speech. On the flip side, Khader pointed out, “Today the house of Islam is damaged, there are holes all over and in the roof…it is really not a nice place to be.” He concluded, “The house of Islam needs a renovation.” In his opinion, “The reasons why Christianity is civilized today…there was a violent showdown” between parties within Christianity.

What is the solution? Khader said, “If we are not succeeding in claiming Islam…then we have to show it is possible to be a democratic, sensible human being and a Muslim at the same time.” He admitted, “We must present strong religious argument” in order to change the tide of radical Islam, “the Muslim needs to view Allah differently” than they do today. He added, “Most Muslims see Him [God or Allah] as angry” instead of him being one of peace. Khader believed that “had [Mohammed] lived today, he would oppose” this ideology of an angry Allah. He said, “We carry a huge responsibility and our voice has to be loud and clear.” Muslims need to stand strong. “The Islamic State and all who sympathize with them must receive condemnation,” Khader acknowledged. He said, “We should intensify military actions to include boots on the ground, otherwise I don’t believe we can stop the Islamic State from doing more harm.” Additionally, “We have to bomb them ideologically as well” because “it is a battle of the mind and the heart.”

Khader reaffirmed that Islam is “a peaceful religion.” He said, “We need to pull up our sleeves and start renovating the house of Islam, we should be inspired by the house of Christianity.” Khader worried, “If we don’t start this great renovation project…it will collapse” because “there is no alternative to a reformation of Islam.” Interestingly enough, Khader pointed out, “Martin Luther had the support of the empire, we need to make it clear to have our leaders support us as well.”

Ispahani said, “Islamic extremism is the primary national security and human rights concern of the world today.” She affirmed that Islamist extremism is the “primary motivator of acts of terrorism worldwide.” “Muslims have devolved into a dozen different sects,” she said, therefore she believed that “pluralism within Islam has to be recognized.” She pointed out that this extremist ideology has led to “human rights abuses including the oppression of women…as well as governmental tyranny.” Ispahani noted, “The brunt of Islamist extremism is borne by Muslim women and religious minorities, both Muslim and non-Muslim…also religious minorities such as Christians and Zoroastrians.” She said, “Whether it is Yazidi Christians in Syria and Iraq, Coptic Christians in Egypt or Hindus, Christians and Sikhs in Pakistan…non-Muslims have often been targeted for exclusion and marginalization.”

Ispahani added, “The Islamist worldview is stagnant” because today’s followers “want women to live by 12th century standards.” She pointed out that women were honored and revered in Islam back to the days of the Prophet Mohammed. “Prophet Mohammed’s wife… was a businesswoman…his daughter Fatima was held up as an example of piety,” she said. Today, “Islamists insist on recreating the norms of the earlier eras,” Ispahani declared. “Groups such as ISIS have been able to recruit women who join extremist men in oppressing fellow women and even acting as facilitators of renewed slavery,” she lamented. But, an interesting note was when she claimed Jews, expelled from Spain due to the Spanish Inquisition, went to Muslim countries and paid for protection, an old practice in the Muslim world.