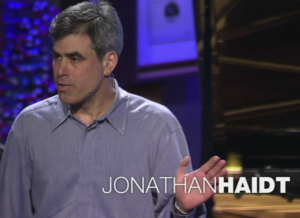 Even lifelong men and women on the Left are becoming concerned about the oppressive political climate on American college campuses. Jonathan Haidt, a psychologist and professor of ethical leadership at the New York University’s Stern School of Business, spoke about the roots of campus rage in light of the mob and “heckler’s veto” at Middlebury College and University of California-Berkeley. The Wall Street Journal published the interview, conducted by Bari Weiss, entitled, “The Cultural Roots of Campus Rage.”

Haidt warned about this “new religion” of “true believers” in ideology. These believers “have reoriented their lives around the fight against evil,” Haidt said, and these believers are “very intimidating.” So much so, “they’ve been given the heckler’s veto, and are often granted it by an administration who won’t stand up to them either.”

Haidt is a “longtime liberal,” noted Weiss, and admitted that he “had never encountered conservative ideas” until a decade ago. He now calls himself a centrist. He founded the Heterodox Academy in 2015, which is composed of “a politically diverse group of social scientists, natural scientists, humanists, and other scholars” about “viewpoint diversity” and the lack of it at colleges. Haidt pointed out, “When a system loses all of its diversity, weird things begin to happen.”

The Heterodox Academy’s membership has grown to about 600 people, up from 100 this past March. Haidt estimated that less than a fifth of the members identify as “right/conservative.” The remainder are some variety of liberal. The interviewer also pointed out that Cornell West, a socialist professor, and conservative professor Robert P. George published a statement denouncing “college illiberalism” and more than 2,500 scholars and intellectuals have signed the statement.

This campus orthodoxy used to be fun and games, said Haidt, but it can descend into violence. “This [campus] religion has the potential to turn violent,” he added. The mob’s attack on a Middlebury professor Allison Stanger “really frightened people,” he avers. He went on and explained why today’s college students have a different definition of violence, citing a Cal-Berkeley op-ed defending the riots at the university that caused over $100,000 in damages:

“People older than 30 think that ‘violence’ generally involves some sort of physical threat or harm. But as students are using the word today, ‘violence’ is words that have a negative effect on members of the sacred victim groups. And so even silence can be violence.”

Haidt told the interviewer, who saw a poster on a “bias response hotline” where people can report incidents of alleged bias and hate, “It’s like East Germany” at NYU.

Too often, parents coddle their children, Haidt said. “By the time students get to college they have much, much less experience with unpleasant social encounters, or even being insulted, excluded or marginalized. They expect there will be some adult, some authority, to rectify things.” Add in the customer-is-right mindset and now, it’s “very, very easy to bring mobs together” and it makes “people very afraid to stand out or stand up for what they think is right.” If one person steps out of line, “you will be called a racist, sexist or homophobe. In fact it’s gotten so bad out there that there’s a new term – ‘ophobophobia,’ which is the fear being called x-ophobic.”

Haidt pointed out that “people are sick and tired of being called racist for innocent things they’ve said or done.” He concluded, “I think that the ‘deplorables’ comment could well have changed the course of human history.”