The faculty at George Washington University made substantial contributions to President Obama when he was seeking that office. They are about to contribute heavily towards their own medical care now that his Obamacare is the law of the land. 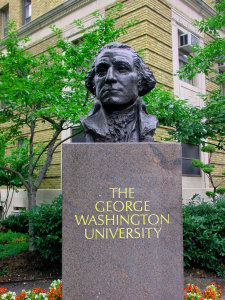 The new plan offered by the university is a high-deductible plan, meaning it will help cut down how much families will pay out-of-pocket. The university’s Vice President for Human Resources, Sabrina Ellis, told the Faculty Senate that the Affordable Care Act’s “Cadillac Tax” will start in 2018 and force the university to pay almost $1 million due to their “high-end plans.”

Ellis said, “The goal is to take steps now, in anticipation of the excise tax, to use our benefit dollars wisely in keeping the plans affordable.”

According to the student newspaper, the new option was the result of a year of lobbying by the faculty to start lower insurance payments. “Between 2012 and 2014, employee out-of-pocket costs grew by 30.5 percentage points. Out-of-pocket costs for employees rose about 3 percent this year.” 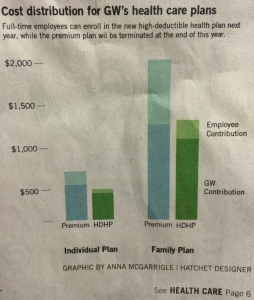 The new plan will cost about $1,400 a year for employees, when compared to the old premium plan, which was around $2,100 a year. Since 132 faculty members were on the old premium plan, they will now have to switch to the newer plan. But, even then, faculty members were upset the university did not cover more out-of-pocket costs. A history and international affairs professor, Benjamin Hopkins, said, “The insurance doesn’t kick in until you’ve spent $1,500 on the deductible, all out of pocket. For the people who are least able to afford it, if you don’t use it, it’s fine [otherwise]. It’s going to be very difficult on these people.” He added, the new plan will not lower costs to employees and would not stop the university from shifting costs back to the faculty over time.

The Faculty Senate’s new offshoot group, the Faculty Association, was started when 160 faculty members signed a petition to ask the university to increase its contributions to the insurance plans of their employees. The Faculty Association was formed because the faculty felt that the Senate was not doing enough about the faculty’s concerns over health care costs. They said that GW was not keeping up with other universities in this regard, and a document showed that GW “contributed fewer cents to fringe benefits for every dollar paid for an employee’s salary than nearly all of its competitor schools.” GW contributes 25 cents per dollar, Georgetown 35 cents and American University 26.5 cents per dollar.