“Journalists don’t see it (biased reporting) as a problem, because they cannot imagine that anybody could be against same-sex marriage for any reason other than bigotry, and they don’t believe they should be expected to be fair and balanced towards bigots,” said Rod Dreher from The American Conservative.

Conservative Congressional delegates sought a Federal Marriage Amendment in 2013 that would secure the traditional definition of marriage and defend the composition of the family. In response to these efforts, the media lashed out with fierce rebuttals villainizing those supportive of the amendment or any of the ideals that it conveyed. The Democratic National Committee effectively summarized its attitude towards a balanced separation of church and state in a tweet, “Republicans just announced that they’ll seek a constitutional marriage amendment later this week. #SameOldParty #GOPRebrand,” and here’s the cherry on top, “#OutofTouch”. 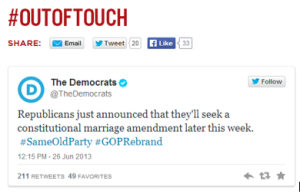 While the media have sought to stifle the freedom of speech for conservatives who are in favor of protecting church and family (or at least label them as #outoftouch/heartless bigots), that freedom for other special interest groups has flourished.

The problem with this phenomenon extends beyond LGBT issues and threatens freedom of religion and freedom of speech on all fronts.

“Thinking which once was completely implausible outside only small fringe groups, rapidly gains social acceptance—dominance even—because individuals fear that if they don’t publicly support this novel idea, they will appear unsophisticated, behind the times (as in “knuckle-dragging Neanderthal”) and will become a social outcast in one’s place of work, school, neighborhood, church, or even in one’s own family. Their critical thinking is pushed aside by their inward mechanism which screams “self-preservation!” wrote Doug Mainwaring, the openly gay founder of the National Capital Tea Party Patriots.

Other excerpts from Mainwaring’s writings can help raise red flags as more executive orders are given by the White House:

“No tactic of the powers opposing Judeo-Christian mores has proven more effective than Political Correctness, wielded skillfully by the Radical Left … They cause otherwise free-thinking individuals to engage in preference falsification (choosing to publicly deny one’s true thoughts and values in order to maintain a positive standing within whatever social group they happen to find themselves in) due to the threat of social isolation … The media play an enormous role in creating information and opinion cascades by controlling the narrative, i.e., the flow of both information and opinion.”

President Obama was praised and applauded at the Democratic National Committee’s LGBT gala in Manhattan Tuesday night for his promise to work around Congress and sign yet another executive order. White House staff has been directed to prepare an order that will ban federal contractors from discriminating against employees on the basis of their sexual orientation.

The lobbying for this law began years ago. “Sometimes you guys were a little impatient. Sometimes I had to say, ‘Will you just settle down for a second?’” Obama said at the LGBT gala, according to the LA Times. After announcing the impending executive order, the president encouraged continual pressure on Congress since the order covers a few million people and Federal law would affect all employees. Congress has not agreed to a similar law.

LGBT advocates are thrilled by the announcement but not satisfied. They warn the president not to exempt religious groups from the order because it could “set a damaging precedent,” says Bloomberg Businessweek.

“While the specifics of this executive order are not yet clear, I believe it must include the same religious protections that are included in the bipartisan Employment Non-Discrimination Act that passed the Senate. ENDA strikes a good balance to ensure that discrimination based on sexual orientation will not be tolerated, but also that one of our nation’s fundamental freedoms – religious freedom – is still upheld. The same must be said for any Obama Administration initiative on this issue.”

The president’s announcement and the subsequent controversy come as no surprise. To quote Bloomberg:

The promised executive order is only the latest flashpoint in a series of Obama-era showdowns over when and how religious exceptions should shield believers from new or old laws. This month, meanwhile, the high court will rule on whether Hobby Lobby’s religious freedom rights trump the Affordable Care Act’s contraception mandate.

Thomas Jefferson’s famous phrase “separation of church and state” continues to be a subject of impassioned debate, but is the phrase becoming exclusively one-sided? Is balance still allowed?

As the president issues yet another executive order, the question is, will he be true to the First Amendment?