It may be the Good Book, but it’s getting a bad rap in Oklahoma. Just months after being the first district to adopt a new Bible as literature curriculum, the Mustang School District is scrapping the idea — dashing the hopes of a community anxious to take an objective look at the Book America was founded on. For the Hobby Lobby owners behind the idea, it was a surprise blow. 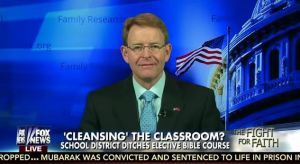 As most people remember, the Green family is best known for its Christian faith, taking it all the way to the U.S. Supreme Court for a landmark win against the HHS mandate. This year, the family was hoping to give students a deeper look at the important role that faith played in shaping Western Civilization and America through an elective class on the Bible. For now, those hopes are on hold after the suburban district caved to another campaign of intimidation from the Freedom From Religion Foundation. Despite being completely optional the curriculum came under fire from the politically-correct crowd for daring to discuss the most influential religious text in world history.

Like Texas, Georgia, Tennessee, and Arizona, Oklahoma legislators joined the ranks of states open to the idea of giving students the opportunity to study the Bible from a standpoint of literature and history. “It’s not intended to be a study of the Bible,” said state Rep. Todd Russ (R). “It’s intended to be an additional tool for presenting our heritage and the history of America and the value system of America and where it came from.” And the idea was popular with more than local lawmakers. Not only did it pass Oklahoma’s Education Committee unanimously, but in a survey of elective classes, this Bible course was the students’ top pick.

And a constitutional one, at that. Bible survey courses like this one have already withstood scrutiny from the courts — enabling states like Louisiana to implement curriculum like this when I was a state legislator. As Steve Green told parents in the Oklahoma City region last year, the courses (which were designed by some of the foremost scholars from Jerusalem to Oxford) doesn’t aim to convert — but inform. “There are lessons from the past that we can learn from, the dangers of ignorance of this book. We need to know it, and if we don’t know it, our future is going to be very scary,” Green explained. No other religious text has had a greater influence on “our government, education, science, art, literature, family,” he told the district.

Freedom From Religion Foundation complained that the class made students a “captive audience” to religious indoctrination. But students can’t be held captive to a class they choose! This is just another small-time bully from the anti-Christian crowd picking a fight with a local school district it assumes doesn’t know any better. Maybe someone ought to remind these religious censors that the Bible wasn’t just a part of the curriculum in America — it was the curriculum until the secularists began imposing their religion on everyone. Yesterday, I discussed this Bible controversy on “Fox and Friends.” If you missed it, check out the video below.