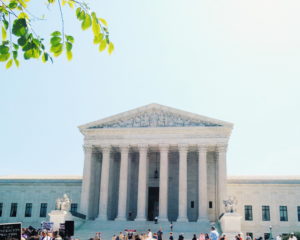 If there is an indefensible position on property rights, count on an academic to take it.

On March 20 the Supreme Court began to hear oral arguments in Murr v. Wisconsin, a property rights case it agreed to take up in January 2016. The Cato Institute previewed the case on St. Patrick’s Day.

“Joseph Murr and his siblings own two side-by-side lakeside lots, one with a recreational cabin and the other left vacant as an investment,” the Cato Institute release noted. “Due to land-use restrictions, they allege that Wisconsin has ‘taken’ the vacant lot, which would require the state to pay just compensation under the Fifth Amendment’s Takings Clause.”

“Wisconsin courts rejected this claim by considering the economic use of the two lots combined. The Murr case thus asks how courts should define the ‘relevant parcel’ of land when evaluating regulatory takings. Cato filed a brief in this case, arguing that current regulatory-takings jurisprudence is unclear and puts a thumb on the scale for the government. Another amicus brief, filed by Nevada and eight other states and co-authored by Ilya Somin, argues that the Wisconsin court’s rule ‘creates significant perverse incentives for both landowners and regulators.’”

Somin did indeed make that point at Cato on Friday. Michael Pappas, an associate professor at the University of Maryland law school, made the counterargument that, well, the state of Wisconsin is the final arbiter of such a claim. “The Constitution has no free standing rule on property so courts look to the state,” he said.