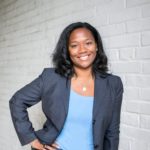 Liz Matory is living proof that you can overcome a lifetime of Left-wing indoctrination.

“Sidwell hid me from the ‘real world’ in many ways, but I love Sidwell Friends,” the once and future congressional candidate writes of that Washington, D. C. institution in her autobiographical first book, Born Again Republican. “We had environmental science as a mandatory class in middle school.”

“We studied Latin American History a year before we studied U. S. History. I think our school had one of the earliest Chinese language classes in the region, which was phenomenal.”

“Diversity Club was routine and the Investment Club was a novelty. One of my white friends was even elected president of the Black Student Union.”

Nevertheless, when her political outlook changed just a bit later in life, she truly left her childhood behind. “Apart from September 11th, I’ve never been so afraid in my life than being a new Republican,” she writes in BAR. “I suppose I should feel lucky that I have lived a rather safe life, but I think I’m getting to know what hate feels like and now it’s coming directly from classmates and people who I thought were friends.”

Nonetheless, she recalls, when she switched political parties, “There was so much connectivity that it felt like as a Republican I was more American than ever before.”

“I remember the first time I saw the American flag at a meeting and we pledged it. I’ve never seen a flag at a Democrat meeting.” And she’d been to many.