Home Perspectives The Top 10 Global Warming Lies of the Left

The Heartland Institute published “Top 10 Global Warming Lies” to answer the reporting of the Left on the effects of global warming. Specifically, the report was designed as a response to the  Environmental Defense Fund’s most recent fundraising effort, “10 Global Warming Effects That May Shock You.” 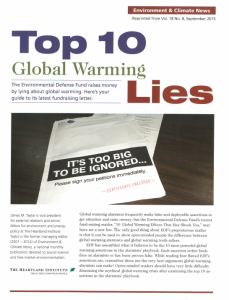 2. Global warming led to the expansion of Lyme disease in the U.S.

4. The inevitable and oft-used Sea-Levels-Are-Rising argument

5. Allergies increase due to global warming

7. Look to Canada as a Model

9. More outbreaks of disease due to global warming

10. The glaciers are shrinking!