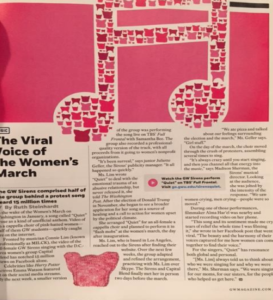 The GW Magazine, a publication by Washington, D.C.-based George Washington University, had a brief article on the recent social media and Internet success of its all-female singing group, the GW Sirens. In the spring publication of the magazine, the article praised the “pink-hatted” female singers for their “viral” (i.e. internet video that becomes popular as people share it across social media platforms such as Facebook, Twitter or Instagram).

The article did not mention that the now iconic Women’s March headgear became widely known as “pussy hats.” Yet, the article praised how the GW Sirens’ song “Quiet” became “a kind of unofficial anthem” for the anti-Trump march. The article claimed that the video had at least “15 million views on Facebook alone” and a performance on the late-night television show Full Frontal with Samantha Bee on TBS.

The song, “Quiet,” became “a source of healing and a call to action for women upset by the political climate.” The article claimed that when the group sang intermittently through the march, both men and women cried. One of the singers said, “We were singing for our moms, for our sisters, for the people who helped us get here.”

Some might argue that feminism has traveled a strange route, from protesting objectification to purveying it.