The University of California-Santa Cruz is one of several campuses with a “mission bell,” but after a petition was circulated in May 2018 demanding its removal, the university complied. Activists claimed the mission bells are a “painful and oppressive symbol for the Amah Mutsun and other indigenous peoples of California” and do “not represent the values embraced by the campus community.” 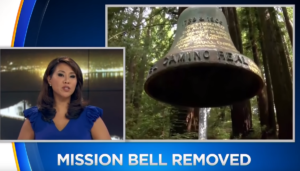 Mission bells are markers throughout the state of California to mark the original 700-mile trail of El Camino Real, which was the trail that connected twenty-one Spanish missions in the state. The bells have marked the El Camino Real route since 1906, with many bells dotting the trail.

The vice chancellor for business and administrative services at the university, Sarah Latham, said she was “pleased” with the decision to work with partners and activists in removing the bell.

Valentin Lopez, the Amah Mutsun Tribal Band chairman, labeled the mission bells “deeply painful symbols that celebrate the destruction, domination and erasure of our people.” He added, “They are constant reminders of the disrespect our tribe faces to this day.”