In Demetrius Minor’s autobiography, Preservation and Purpose: The Making of a Young Millennial, the young Pentecostal minister relates his journey of self-discovery through the grace of God and how ultimately this shapes his impression of the millennial generation. 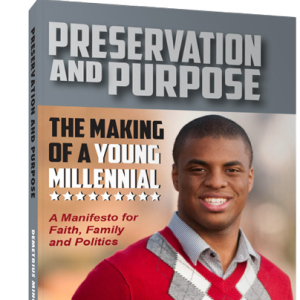 Through this self-discovery, Demetrius shapes himself into an unusual yet relatable character;  a black American and a self-identified conservative in an increasingly secular country. By doing this not only does he put our own lives into perspective while overcoming defeat through faith, family and politics, but inspires us to question the reasons for our beliefs.

“It will take the concerted effort of an entire generation to wake up the troubled souls in America today,” the pastor remarks, adding that “From my perspective, the angst and dysfunction facing them is likely the result of many factors, including not having a strong father figure to guide them, and the overuse of prescription drugs to cover up the negative effects of family dysfunction.”

As a millennial himself, he does not hesitate to remind us of the future which the upcoming generation is to be held accountable for, “Real progress will be based on the reemergence of morals and biblical principles in the hearts and minds of all voters, regardless of political affiliation.”

Upon reading you may ask, “Well how about the free establishment clause” and “the government’s divide between church and state?”

The young Republican accordingly concludes, “Until elected officials acknowledge God’s principles as a cornerstone in government policy, we will fail in every area of government.”