“Atlantic Empiricisms” was the name of a panel discussion at the 2015 Modern Language Association convention in Vancouver, Canada, and it was as bare as the title suggested. 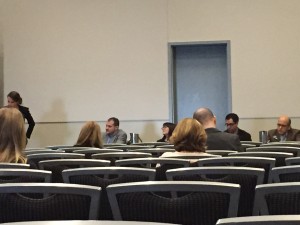 Britt Rusert, who teaches English at the University of Massachusetts-Amherst as an assistant professor and is a faculty member of their “W.E.B. DuBois Department of Afro-American Studies,” blasted colonialism for which she viewed as on violence and subjugation. She admitted that colonists were “constantly threatened by inclement weather, disease and rebellious slaves.” But, she said, Afro-American poetry is important because it helps “surveill these spaces of resistance” by highlighting the symbolism of fences; or fences as the “peaceful and natural extension of British enclosure.”

According to an assistant professor from Western Washington University, the plantation and slave culture “underlies the human economy.” Christopher Loar felt that the taming of the Southern wilderness, or the “transformation of a swamp into a successful plantation,” displayed “how the human interacts with the natural world.” He could not stop “relentlessly imagining this wilderness” and that displayed man’s “dependence on its environment…rather than the mastery” of it. Loar believed the taming of the swamps in the Carolinas told him that “vital energies themselves must be tapped” and humans are “maintaining that power by representing it” and trying to “sentimentalize it.” As a professor who studies ecocriticism, he said this type of literature pushes the “advocacy for a more regulated use of land” and the “sentimentalization of nature and its emblems.”

Michael Litwack, who teaches ethnic studies and postcolonialism at Brown, integrated cyberspace (i.e. The Internet) and slavery in his remarks. But, he claimed, cybernetics and their “self-replicating codes…[show the] commonality of racial slavery; it’s afterlife.” He suggested cyberspace can help explain the “vicious cycle” of slavery and illustrate “this trope of the distressed white…through interactions with black people.” Cyberspace’s task, he said, is the “task of steering white racial affect.” He believed it will help “maintain harmony, to maintain connection” between the races.