In one of the few crowded roundtable discussions at the recent MLA conference in Vancouver, which was far from a discussion, four female professors went over their papers on feminist, queer and disability theory (the latter known as “crip” theory in academic slang). 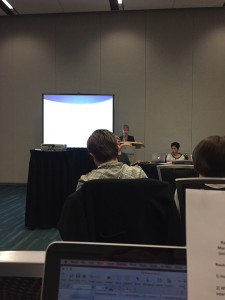 Rachel Adams, an English and comparative literature professor at Columbia, lauded the modern day “scholarship on modernism and disability,” which has “integrated feminist perspectives” into the field. In her opinion, the three guidelines to analyzing feminist, queer and crip theory are “reconsideration, representation and recovery.”

Reconsideration is the “identification of well-known authors” with a corresponding disability, but not letting it become a “diagnostic” of their literary abilities. She gave the example of Virginia Wolfe and her mental illness, which Adams said was not indicative of Wolfe’s writing. Instead, Adams suggested, “Disability can inform writing and visual art” and help “categorize the normal.” She believed that “connecting stuttering and impairment” helps one realize they are “a symbol of sexual repression and male virginity.” It helps improve “opportunity to access” for disabled writers and makes everyone “most attentive to feminist perspective.”

Recovery, in her words, is recognizing writers who “have been excluded from the canon and not even be considered artists at all.” Adams noted, “Projects of recovery, by definition, are feminist projects” that give “marginalized Others” a voice. This also contributes to the “gendering of intellectual ability.”

Madelyn Detloff, Miami University of Ohio’s associate professor of women’s and gender studies, felt feminist, queer and crip theory need to converge. In her own words, “This is where queer theory needs to go” in order to continue today’s “similar, discursive trend.” Detloff gave a brief slideshow presentation of the linkages of brain synapses and biopower, which helps professors like her to understand “unmarked identity…oppression…[and that] exclusion are emergent and dynamic.”

Biopower, in her estimation, “add[s] disability already to the way we look at modernist culture” and helps counter “eugenics [and] scientific racism in today’s society. The combination and convergence of these theoretical fields creates “a constellation of ideas about the normative of masculinity, gender and sex” and helps create “new normative models for reading text.” She called this, “Claiming crip,” and emphasized, “we all have bodies and minds with shifting abilities” and that “disabilities should be made discernible” in today’s literature.

The third panelist, Maren Linett, who works at Purdue University as an associate professor of literature, disability and gender studies, applauded the efforts to explore this “thin but durable stand of rhetoric.” The combinations of these theories are “anti-graceful, deforming, impressionistic” and show “every deformity has its just compensation.” Too often, people compare those “crippled by circumstance” and the “conflation of a cramped and deflated soul.” To make her point about feminism, she displayed a turn-of-the-century poster mocking men and promoting women’s right to vote, where there was an “ironic contrast between the unfit man who has the right to vote, and a fit woman who has not.”

Lastly, Janet Lyon, an associate professor of English and women’s studies, integrated her emphasis in studying modernism to “disability in crip theory.” She said, “Modernists may be disability-phobes, but modernism isn’t and can’t be” separated from disability theory. She said that would be “cracked thinking” and hopefully, would lead to the “shredding of bourgeois perception” in the field. She told the audience, “It was feminist theory that led me to disability studies” in the first place, and “assumptions about disability and disabled bodies led to …discrimination.”

Lyon believed, “Intellectual disability is important or is as important” and in her opinion, the “complex-mindedness of disability [goes] beyond apparent intentions of its scribes.” The dissent and criticism of these fields are “a pitch for nonpurity but it is mounted with the logic of eugenics,” Lyon said. She boasted she had “a sort of crip pride” in certain gay and disabled literary characters.