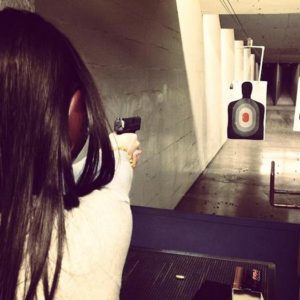 Covering the conflicting opinions of coasters and flyovers, Loesch hit on religion, abortion, feminism, media frauds and, of course, guns. In her introduction, she asks the question, “how can you run a country you’ve never been to?” Politicians in D.C. judge Christians but have never been to a one room church on Sunday morning. The media condemns pro-life and pro-gun people but ignore the process of abortions and the slow response time of police in rural communities. The world of dirt roads and hardworking Americans is far from “Pinkies-out, cocktail-drinking appletini fans” who stand around in their multimillion dollar mansions with armed body guards watching over them. Loesch’s book is a “rallying cry for anyone who wants our leaders to understand and respect the culture that made America exceptional in the first place.” 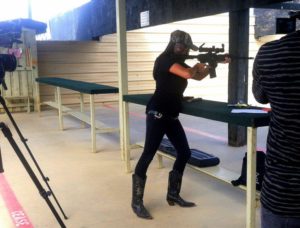 Being that firearms are so important to people in the Flyover states, while interviewing her, the conversation switched (naturally) to guns. Growing up, Loesch was taught to shoot by her grandfather. Realizing he couldn’t take a chatty girl with him hunting, he made up for it by taking her outside and taught her how to “shoulder a rifle properly, how to load it, how to aim it and how to shoot it properly.” The targets changed over time from cans to small action figures as her abilities matured. But Loesch said that her favorite part was that “there was no difference in how he treated us girls and the boys handling firearms because he knew we were equally capable.”

Working in media has given Loesch a firsthand experience of how the media portrays not only gun owners, but in particular, women gun owners. “The media is sexist in how it covers and portrays women gun owners. (But) they ignore them. The media wants to portray gun owners as old fat white men but that’s not the case at all because no one in the media wants to hear a smart woman who actually has firearms, knows how to use them, and knows the laws. It’s a huge problem in the media and it betrays when they say equality and equal coverage and it’s a very patriarchal issue.” 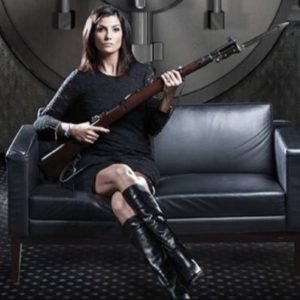 When she began her career as a talk show host, she quickly was bombarded by angry listeners who were threatening her and her family’s lives, simply for a differing opinion. However, these threats became her introduction to defending the Second Amendment and woman’s right to carry and own firearms. “It made me really mad that they caused me fear and I never wanted to live in that sort of fear, I wanted to be empowered. I wanted to be able to have a plan and know that I could defend myself and my family.” Loesch gathered as much information as she could and received training before obtaining a handgun for self-defense.

While many women obtain their Concealed Carry Permit or purchase a handgun for the sense of empowerment, Loesch feels differently. “I think it’s that sense of contentment. I don’t think that I would use the word security or empowerment. I think I just feel content knowing I have the ability and the skills and the access to protect myself, and that is just what gives me a lot of contentment” she said.