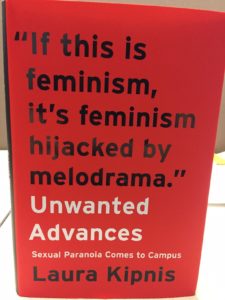 Laura Kipnis, a professor at Northwestern University, faced a Title IX investigation from the U.S. Department of Education over an essay on sexual paranoia among Millennials and their professors and administrators on college campuses (which appeared in The Chronicle of Higher Education). Now, Harper Collins published her account of what happened, which also includes content and background on reasons for an increasing lack of due process, the emergence of sexual paranoia, and the stepped-up Title IX investigations.

Kipnis pointed out that a Title IX investigation from the Department of Education’s Office of Civil Rights (known as OCR) “can last two to four years” and can cost a school between $200,000 to $350,000. She found that Stanford, Princeton, Cornell and Harvard “have all faced at least three investigations each.” She also discovered that since 2011, 321 investigations have been undertaken, with 270 investigations at 190 schools. Kipnis estimated it costs at least $60 million to conduct these investigations and it could threaten up to 25 million people working or studying at college campuses, if falsely accused.

She also claimed that the Department of Education’s “Dear Colleague” letter, which instituted OCR policies and investigations, brought this sexual paranoia to college campuses.

Her book also discussed several instances of college professors who found themselves out of a job when accused by students of sexual harassment and the like. Some of these professors lost their life savings, along with their careers. Instead of focusing on hypotheticals, Kipnis focused on the real-life experiences of some of her academic colleagues to display how Title IX has gone far from its intended course.

It is an important read for those concerned about due process, government overreach and Millennials’ hyper-sensitivity over sex.