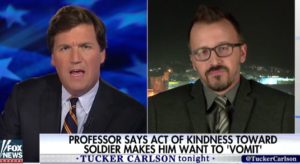 It is not the first time that Drexel professor George Ciccariello-Maher has gotten himself in trouble with the public on his comments on the social media platform known as Twitter. First, Ciccariello-Maher tweeted about wanting a white genocide for Christmas last December, which sparked outrage. This time, he tweeted about seeing a uniformed soldier get a seat on an airline when a passenger gave up his or her seat for the soldier. He tweeted, “Some guy in first class gave up his seat for a uniformed soldier. People are thanking him. I’m trying not to vomit or yell about Mosul.”

Now, the university’s faculty senate is investigating his social media comments made outside of his work capacity, which may restrict punishment since it could fall under academic freedom protections.

Ciccariello-Maher is a professor of politics and global studies at Drexel.