Home Perspectives Civics, but for Grown-Ups

Some professors are more rooted in reality than others. Unfortunately, they tend to be retired. 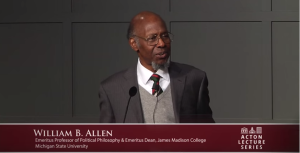 “President Lincoln called on every mother to whisper words of liberty to every listening babe,” William B. Allen, a professor emeritus at Michigan State University said in Indianapolis last weekend. “We should do the same for grownups.”

Dr. Allen is the author of Reviving National Character in the Midst of Political Disorder. He was speaking at the regional meeting of the Philadelphia Society, a group of conservative intellectuals that was formed in the wake of the Goldwater defeat in 1964.

“Our diversities do not constitute a national character.” He lamented the trend towards submersion of American identity when U. S. Supreme Court Justice Stephen Breyer “declared that he was ready to declare capital punishment unconstitutional because it was leaving us isolated in the world in applying the death penalty.”

Yet ultimately, he regretted one overriding change in American history: “Deference to the people has become reduced to commanding the people.”