WASHINGTON– College students were among the crowd of over 1,000 attendees at Friday’s Road to Majority conference, a weekend-long event that was sponsored by the Faith and Freedom Coalition. Presumptive Republican nominee Donald Trump headlined the event at the Omni Shoreham Hotel, prompting many supporters to sport their red “Make America Great Again” hats, as well as their Trump-themed graphic T-shirts. 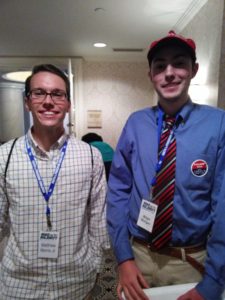 “I’m going to do everything in my power to see he’s elected,” Matthew Morris Jr. says.

The engineering student from The University of Maryland says he supports Trump even though he “gets some dirty looks” on campus.

Brian Mulligan, who also studies mechanical engineering at The University of Maryland, says his grandpa, who was a veteran, would have voted for Trump if he were here today.

“I always like to live like the way my grandpa liked to live,” Mulligan says. “We need to get our fight back.”

Echoing Trump’s belief that America should not accept any more incoming refugees, Mulligan says Americans “need to make sure we take care of our own people” before accepting more refugees. 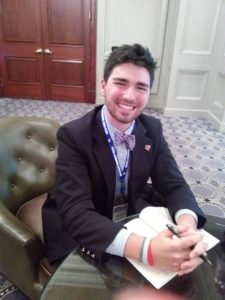 Photo by Amanda Florian. Estes pauses to take notes upon hearing Trump speak at the Road to Majority event.

Hunter Estes who studies international politics at Georgetown University says he has “personally grappled” with the idea of allowing refugees to come to the United States.

“The most Christian thing to do is not to bring the country in because you’re not addressing the problem.”

At first, Estes was hesitant to support Trump, but says he believes the candidate is transitioning and “hopefully speaking more eloquently” after Trump’s “2 Corinthians” mispronunciation.

“I was worried when he came out in the beginning and said he’s never asked for forgiveness,” Estes says.

Last year, during a Q&A at the Family Leadership Summit in Ames, Iowa, Trump told moderator Frank Luntz that he hasn’t asked God for forgiveness, but that he – instead — tries to “make it right.”

This week, Trump clarified that statement, adding that he hopes he does not have to ask for “much forgiveness.”

Estes says that he now feels Trump is now starting to understand how to reach an evangelical audience.

But not all college students in attendance had positive feelings toward the candidate and his “hateful” rhetoric. Some protesters interrupted Trump during his speech chanting, “Stop hate. Stop Trump.” The crowd responded by chanting “Trump” and “USA,” booing the protesters as they were escorted away by security. 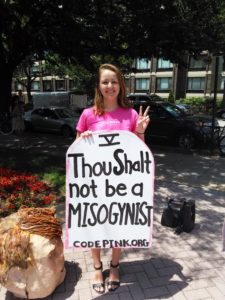 Photo by Amanda Florian. Green stands outside the Omni Shoreham Hotel to protest Trump and his rhetoric.

“We think it’s horrifying he could end up in our White House,” Rebecca Green, a sociology student at Northeastern University tells Accuracy in Media.

After Trump finished his speech, protesters from Code Pink, a women-initiated movement, gathered outside, waving signs that read “Thou shalt not be a misogynist” and “Islamophobia is un-American.” 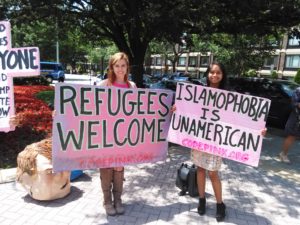 Alli McCracken, who studied political science and religious studies at Hobart and William Smith Colleges, says she is “sick of choosing between the lesser of two evils” and that she is “deeply worried about the rhetoric that’s spewed by Donald Trump.”

Aniqa Raihan who studies international relations at George Washington University also stood outside to protest with Code Pink and says she “is not going to sit around” during this election.

“Who has he not offended?,” she asks. Raihan says she and the others want to “disrupt these damaging narratives” crafted by Trump.

“We need to build bridges instead of walls,” Raihan says.