Last week, students at Indiana University-Bloomington mistook a Dominican monk for a Ku Klux Klan member. It makes us laugh, but it ought to make us a cry. 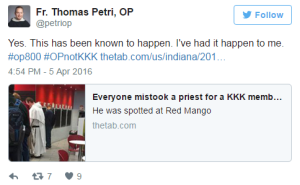 The mysterious intruder slithered his way on to campus in the dark of night, where all was happy and all was politically correct. His presence sent the forces of “diversity” and “tolerance” into a tizzy. The frazzled secular faithful rushed to social media — the force used to demonize a little Indiana pizza shop last year when its owners dared to oppose catering a same-sex wedding — to express their fear of the dangerous figure, who, they claimed, was equipped with customary “whip” along with his nefarious “white robes.”

“iu students be careful,” Tweeted one vigilant student, ever on the well-trained watch for creeping racists bestriding the campus, “there’s someone walking around in kkk gear with a whip.”

That mere assumption ought to give pause. The notion that any KKK member would don the white regalia and jack-boot across a campus in today’s America is unlikely enough. The modern university is the least-hospitable place on the planet for any racist, let alone a bona fide klansman. A white-collared priest strutting down the streets of Saudi Arabia would meet less resistance than a white-hooded KKK goon marching across the quad.

But alas, the enlightened undergrads in today’s university are trained to see a racist under every bed. And thus, the student body sprang into action at the sight of this menacing man on campus.

Residential hall advisor Ethan Gill zapped an email to his culturally sensitive peers, warning them of the ominous “threat” encroaching: “There has been a person reported walking around campus in a KKK outfit holding a whip…. Please PLEASE PLEASE be careful out there tonight, always be with someone and if you have no dire reason to be out of the building, I would recommend staying indoors if you’re alone.”

Later in the evening, a relieved Gill retracted his warning, but not before recounting the sense of horror unleashed by the unsuspecting friar: “Then my residents, terrified, come running to me, saying yeah the report must be true, they saw him and couldn’t believe there was a klansmember with a whip,” he explained. “And I see this picture. It’s a priest. With a rosary.”

A “rosary”? One wonders if Gill’s explanation really clarified much to the bewildered. Had he mentioned a rainbow flag, or confederate flag — well, that would be clear enough. But a rosary? How many of these modern disciples of diversity would recognize a rosary if it tripped them? This is a blessed era, after all, when our pupils of the culture (educated by sitcoms and social media) actually believe there are vastly more homosexuals in America than Catholics.

It’s no surprise that college students would be dumbstruck at the image of a monk.

So, this is funny, right? A good laugh. No, it is laughably sad. It is completely symptomatic of the life and mind of the cultural-moral insane asylum we call the American university, where — in the name of secular liberalism, multiculturalism, diversity, and, of course, “tolerance” — a silent war has been relentlessly waged upon Western civilization for decades. In fact, fittingly, mere days after this incident, students at Stanford University resoundingly rejected — by a margin of six to one — an effort to add a required course on Western civ to the curriculum. No doubt the course might have hampered their ability to take that elective in “Queer Theory” or “Gay Autobiography” or “Narrating Queer Drama” at Stanford’s department of Feminist, Gender, and Sexuality Studies. If students at Stanford, and at Indiana University-Bloomington and elsewhere, would dare explore Western civilization, they might discover that their entire educational tradition owes quite a debt to these arcane monks with robes and beads.

In fact, I wonder if someone at Indiana University-Bloomington’s GLBT Student Support Services office sounded the alarm upon learning that the campus klansman was in reality a celibate monk who opposes the idea of his buddies in the monastery marrying each other. Now there’s a scandal, kids! Get out the torches!

In the ashes of the Judeo-Christian values and timeless absolutes that they have set ablaze, our modern progressives in the academy have instead fashioned a molten calf of race, gender, and sexual orientation. They instill a reflexive ultra-sensitivity on matters of race while they indoctrinate firmly against orthodox Christianity. And thus, when these late-adolescent products of contemporary academia look at a Dominican priest in blinking ignorance, misidentifying him for a white-hooded klansman, we shouldn’t be surprised. This is a direct extension of their “higher education.” This is what they and their parents have paid for at great financial and moral cost. They are educating for imbecility.