Last week, a dear friend of Accuracy in Academia, author M. Stanton Evans (1934-2015), would have turned 83. Although he focused most of his energies in his later years on researching and writing about the history of espionage and internal security in the United States, he had quite a background in economics as well, much to the benefit of his readers over the course of his career.

Indeed, he studied under the noted Austrian economist Ludwig von Mises. On at least half a dozen occasions, I heard him outline what he saw as five essentials for a functioning economy.

They are worth repeating here, particularly given our economic lives and times of late:

5.) No more than half of the Gross Domestic Product devoted to government at all levels.

If you are doing a mental checklist on these, you might conclude, with some evidence, that we are failing this five-part test. Nevertheless, Evans was fond of occasionally using the example of the great novel A Tree Grows In Brooklyn 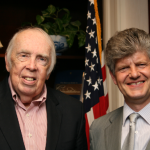 wherein just a little bit of sunlight and rain allowed the object in the title to grow.

Yet and still, naysayers might object that the checklist is biased toward the right. Nonetheless, I heard Evans himself note at least once that in such a system there is room for a welfare state.

Arguably, for much of America’s history, there has been. Incidentally, I never heard him use the term capitalism. He always used the phrase free market.

Perhaps we should do the same, especially since that is what it is.