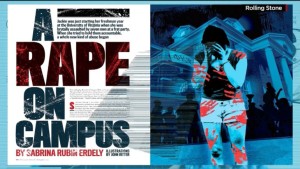 You didn’t say? Well, looks like the ‘Jackie’ saga at the University of Virginia continues to roll along:

A lawsuit against Rolling Stone for publishing a story in 2014 about a young woman at the University of Virginia who said she was viciously gang-raped by a bunch of frat guys — an article that was ultimately retracted by the magazine after the claim was discredited — continues to shed light on how off-base the reporting in it was.

New evidence suggests U.Va.’s Jackie, the woman who claimed she was raped, didn’t justmake up the attack — she also made up her rapist, according to attorneys representing Dean Nicole Eramo, who is suing Rolling Stone for the way in which it portrayed her in the now-infamous article “A Rape on Campus: A Brutal Assault and a Struggle for Justice at UVA.”