One person can make a difference, President John F. Kennedy said, and thanks to Hawaii State Rep. Bob McDermott (R) more people might try. The conservative dad took on the state’s Education Department and scored a partial victory. Since December, Rep. McDermott has been a campaign of one, working to roll back Hawaii’s explosive sex ed curriculum — which is so explicit it would make most adults blush. Homosexuality gets the state’s support, as well as other controversial practices that parents should reserve the right to explain to their kids themselves. 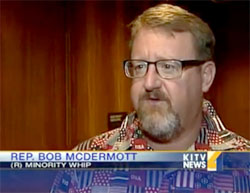 Not surprisingly, the Left (whose agenda is built on sexual liberalism) is howling that asking moms and dads’ permission is somehow “gutting” the program. If only McDermott and others were so lucky. For the Hawaii representative and countless parents, however, the news was a major relief. Our hats go off to Bob McDermott for showing the kind of leadership too many elected officials lack!

Tony Perkins heads the Family Research Council. This article is excerpted from the Washington Update that he compiles for the FRC.