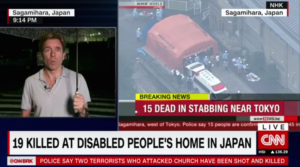 Once again, the anti-gun movement has been discredited, this time with a mass killing using a knife in Japan. Within 40 minutes, a young man injured almost 50 mentally disabled patients, killing 19. Satoshi Uematsu broke into the facility around 2 a.m. and supposedly slashed the patients’ necks, although details about the attack have not yet been released.

Because of the country’s extreme gun laws, attackers resort to stabbing, although this is the largest mass killing in Japan since World War II. Uematsu delivered a letter detailing his plan to kill the disabled before he was fired from the facility earlier this year, although no action was taken against what the letter threatened. The letter, which was delivered to a speaker of parliament, stated that his “aim is a world where people with multiple disabilities who have extreme difficulty living at home or being active in society can be euthanized.” The suspect turned himself in two hours after the attack and reportedly was extremely calm.

This is not the first time there has been an attack using a knife in Japan. In 2001, a man killed 8 children and injured numerous more at an elementary school. In 2008, a man drove his truck into a crowd and stabbed 7 people to death, injuring 10. Outside of Japan, in May, a man stabbed multiple people outside a train station in Germany; in 2004, a man in London stabbed six people; and 33 people were killed in a stabbing spree on a Chinese subway train. All these countries have strict gun laws, resulting in attacks with other weapons.

If the left claims that no guns equal less crime – shouldn’t these countries have lower murder rates? The fact of the matter is, if someone wants to cause harm, especially to the mentally disabled and defenseless, they will break the law no matter what to do it. As we have seen, mass murder can be committed with trucks, axes, bombs and knives, not just “assault weapons.”