Home Perspectives Still feeling the Bern at the DNC 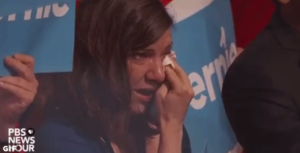 Although the liberal media is fawning over the Democratic National Convention, it’s hard to ignore the issues surrounding the event. Bernie Sanders supporters turned out in full force at the Democratic National Convention, causing havoc on the supposedly unified Democratic Party gathering. With the recent email scandal showing that Clinton was favored by the Democratic National Committee, the event began with DNC Chairwoman Debbie Wasserman Schultz being heckled off stage during a breakfast meeting, unable to give her speech due to the large amount of chanting, sign waving and pushing towards the podium. The DNC is supposed to remain neutral in primary contests but the leaked emails proved the partiality towards Clinton many claimed.

Disturbances continued throughout the day and during Senator Sanders’ speech in which he urged his fans to vote for Clinton. Despite his three minute ovation, the enthusiasm turned to anger as he continued to attempt to bring his followers to Hillary’s side. This was followed by chants of ‘lock her up’ and booing despite Sanders’ attempts to mollify the angry supporters.

Although the floor was being patrolled for rowdy supporters, it was hard to contain the crowd, which was a majority of people decked out in Sanders gear. Later in the evening, comedian Sarah Silverman attempted to lighten the mood but protesters’ boos drowned out her words. Scolding the crowd, she called them ridiculous and said that despite being a Bernie fan, she was going to vote Hillary, and they should give Bernie up. This was met with more jeers and waving of Sanders’ campaign signs.

Other speeches followed with discourse, despite the fact that the Hillary campaign had hoped for a more unified event than the Republican convention last week. The only time the jeering quieted was during Michelle Obama’s speech when she joined forces with her former adversary while blasting Republican candidate Donald Trump.

Protests outside the convention continued despite the high temperatures and over 30 people were arrested for crossing the barriers. The chants of “Hey Hey D.N.C. we won’t vote for Hillary” will presumably be heard throughout the week. Senator Sanders now faces the challenge of ending the revolution he started and bringing his supporters to Clinton’s side.