“No Safe Spaces,” a documentary which aired in select theaters nationwide in the past month, featured comedian and podcast host Adam Carolla and acclaimed author Dennis Prager and their views on the First Amendment’s future in America. A good amount of the documentary focused on their podcast interviews, and their upbringing and experiences, such as Carolla growing up in a welfare-dependent home and Prager’s upbringing as a devout Jew who once served as an Israeli government agent in Soviet Russia. 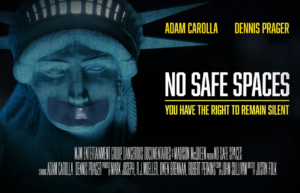 They interviewed an extensive list of political pundits and commentators, online personalities, college professors and administrators, and activists. “No Safe Spaces” did not exclusively interview political conservatives, but also liberals and leftists to provide ideological balance and provide deeper context to the ongoing discussion about the First Amendment in America. The documentary interviewed the likes of:

It is difficult to go through the documentary piece-by-piece, due to the wide swath of information that it goes over for the audience. The documentary outlined multiple on-campus controversies related to freedom of speech, such as Yale professors Nicholas and Erika Christakis being shouted down for endorsing Halloween costumes, Bret Weinstein’s dismissal from Evergreen State College for refusing to stay off campus due to an anti-white protest event, protests at California State University-Los Angeles over Ben Shapiro’s scheduled speech, and outrage over Ann Coulter’s scheduled speech at the University of California-Berkeley. It went into as much detail as time permitted on these various controversies, which highlighted how the First Amendment is under assault and under attack by today’s on-campus college activists. The video footage of these protests, combined with the candid interviews from those affected by the protests and at times, violent and aggressive rhetoric from protesters, portrayed a college campus run by activist students, not college administrators.

The documentary’s premise painted a stark contrast to what the mainstream media and academics portray, that freedom of speech is alive and well on college campuses, despite evidence to the contrary. Van Jones, while on Carolla’s podcast, said that he preferred that college students be offended each and every single day in order to grow from those experiences. He pointed out that college students were meant to graduate and leave their safe college environments, and being offended every day while at college will help them become stronger and understand the importance of freedom of speech.

Former Harvard University law professor Alan Dershowitz said that he was not worried about the much-hyped anti-fascist “Antifa” protesters, but the “hard left” due to their repression of freedom of speech on college campuses. Dr. Everett Piper added that college campuses now protect “ideological fascism” at the cost of the First Amendment freedoms Americans should hold dear.

“No Safe Spaces” dove into a Canadian controversy in which a teaching assistant was criticized by administrators for playing a video of Jordan Peterson discussing gender identity and gender language during one of her discussion labs with students. The assistant was accused of gender violence due to playing the video and recorded the conversations, the latter of which is still in the legal system in the form of a lawsuit between her and the university, Wilfrid Laurier University in Ontario, Canada. Peterson chillingly reminded the audience that this kind of groupthink, where only one opinion reigns supreme, led to Nazi Germany’s systematic mass murders and Soviet communism’s murder of tens of millions of people.

No Safe Spaces also features an interview with Bret Weinstein over the months-long anti-white protests at Evergreen State College in Oregon; the campus was paralyzed due to the administration’s resistance to confronting student protesters who occupied an administrative building. Weinstein noted that as a liberal, he thought that fellow liberal students would agree to openly discuss why he did not agree with activist demands that all white people leave the college campus for an annual event highlighting racial inequality. But he was shouted down in a scene reminiscent of the French Revolution:  activists shouted at, berated, and criticized Weinstein in an example of an unfair public trial without impartiality. Weinstein’s wife, Heather Heying, said that when children were raised by helicopter parents and bubble-wrapped or shielded from other views, “of course you’ll be fragile.”

Prager, at the end of the documentary, poignantly said, “America is the true safe space.”

Overall, the documentary was presented from a conservative perspective, but it was balanced in how it interviewed and presented liberal and progressive views of the current free speech environment. There were multiple quotes from liberal and progressive figures, and it provided context and examples of how free speech culture is neglected, if not trampled over, on college campuses. It is worth watching for the lay person in order to get past the censorship from the media and the likes of Big Tech, including Google, Facebook, and other internet-based or social media platforms.

Reviews and ratings on Rotten Tomatoes, a popular website where movie critics can rate movies as “fresh” or “rotten,” displayed the divide of opinion over the First Amendment. The documentary received six “rotten” reviews from critics and five “fresh” reviews. Meaning, six critics thought the movie was terrible (i.e. “rotten”) and five critics disagreed with the “rotten” rating. Much of the criticism focused on how the documentary was one-sided and dogmatic, which is ironic in itself as most documentaries tend to appeal to liberal and progressive ideologues.

The website also featured two distinct rating systems. On a scale of 1-100, the “Tomatometer” from critics is 45%, which is considered a bust or a terrible movie. However, the audience score, which comprises of reviews from non-movie critics, was 99%. In other words, moviegoers rated the movie much higher than the movie critic class.