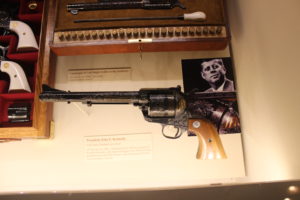 While the National Rifle Association may be in the headlines for its legislative work, or endorsing presumed Republican Presidential candidate Donald Trump, the lesser known work acquiring, displaying and preserving historically significant firearms is a side of the NRA the public rarely hears about.

The NRA Museum in the NRA headquarters in Fairfax, Virginia is nestled in the main floor of the offices. While it is unassuming in size, it makes up for in the sheer amount of items on display. The museum boasts 3,000 guns on display, only half of the guns in the NRA’s possession. A staggering 99% of the museum’s items were donated including the 400 guns that greet the visitor in the first room, all a part of one individual’s collection.

The Robert E. Peterson collection, as it is known, displays only one in 10 guns he owned and as Senior Curator Doug Wicklund explained, “The first thing that you see when you walk in are the three finest guns ever made.” These are followed by 12 Gatling guns, guns that were made or owned by Princess Diana, Dukes and Presidents. Annie Oakley’s guns as well as numerous oddities such as a vampire hunting Colt, a Nazi belt buckle gun and several first and last edition firearms are also on display. 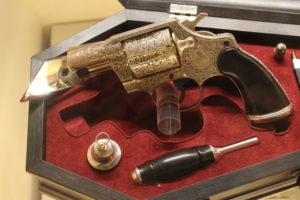 As the visitor moves past this astounding collection, they find the rest of the museum in chronological order, from the gun brought by John Alden on the Mayflower, which he later used to hunt for the first Thanksgiving dinner to guns from Lexington, Concord and the guns that Lewis and Clark used on their expedition. Each weapon is lovingly dusted and cared for each morning, a task that begins several hours before visitors begin arriving.

As the displays move from colonial era to a more settled America, visitors find themselves at an exhibit that models Harpers Ferry, Virginia and “the gun than began the civil war”. The Sharps model 1853 Carbine was attributed to use by John Brown in his raid on the armory and the rest of the exhibit includes many firearms used by confederate and union soldiers including Jefferson Davis’ custom-made handguns. Following the Civil War, the NRA was founded to better train the US citizens in how to properly use firearms and they have been doing it ever since.

A small section of the museum commemorates the beginning of the NRA and its contribution to firearm training throughout the years. Started by two Yankees after the Civil War, the pair studied firearm training in Europe before writing a marksmanship manual. The NRA has been teaching firearm competency and safety to US citizens since 1817 and still continues to do so. 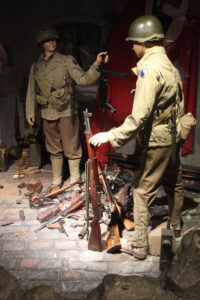 Wicklund mused over the exhibit for World War II that showed soldiers standing over piles of Nazi paraphernalia that “it was only the Americans who fought for souvenirs.”  The entire display was donated to the museum from a veteran of the war, as were many of the other firearms that sit in the exhibits for both World Wars, Vietnam, Iraq and Afghanistan.

Among the other displays are some of the most popular including a steampunk exhibit and a Hollywood exhibit that includes guns used by Tom Selleck, John Wayne, Clint Eastwood, James Bond, Stormtroopers and numerous others in their most famous roles. This is popular with people of all ages because of the variety. From old westerns, to apocalyptic sci-fi shows, the exhibit display shows the variety of actors who support the NRA, who personally donated the weapons to the museum. 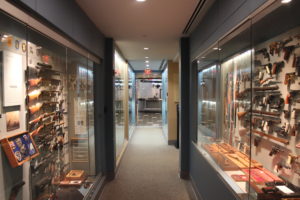 The last section includes extremely unique or rare weapons including the world’s smallest gun, and guns that have the serial numbers 1, 2 or 3. On one wall, firearms and handguns are framed with photographs from 9/11, the weapons recovered from the rubble of the World Trade Center. As visitors leave, one last display stands between them and the door, marked by a plaque with a quote on it. The quote, which came from a speech given by Charlton Heston, is lovingly taken literally stating, “(The) doorway to freedom is framed by the muskets that stood between a vision of liberty and absolute anarchy.” This quote fortifies visitors as they make their way through the narrow hall, framed with muskets to the land of the free.