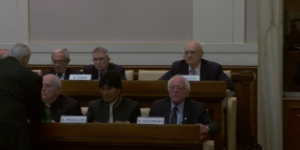 The liberal media are so in love with Pope Francis that they can’t report the hard truth about his blatant interference in the 2016 presidential campaign and what it represents.

Not only was socialist Senator Bernie Sanders (I-VT) invited to a conference of the Pontifical Academy of Social Sciences (PASS) on Catholic social teaching and the world situation, he also met personally with Pope Francis.

A secular Jewish atheist, Sanders is not even a member of the Catholic Church. “I am not actively involved with organized religion,” Sanders has said. His brother Larry says, “He is quite substantially not religious.”

Instead, he is a socialist with strong ties, if not membership in, the Democratic Socialists of America (DSA), the same group that backed Barack Obama’s run for president in 2008 and is the U.S. affiliate of the Socialist International.

His involvement in the Vatican conference demonstrates how Pope Francis is moving the Roman Catholic Church into the global socialist camp.

In fact, Sanders’ appearance is much more than a brief encounter. It is entirely consistent with how, under Pope Francis, the Pontifical Academy of Social Sciences has become what conservative Catholic Michael Hichborn of the Lepanto Institute calls a haven for Marxists and socialists. He says that these groups are maneuvering to bring into being an international socialist order.

In Sanders’ speech to a conference of the Pontifical Academy of Social Sciences, he embraced Catholic “social teachings” in his indictment of the “market economy,” or capitalism.

At the event, Sanders sat next to Evo Morales of Bolivia, who had previously presented a communist crucifix to Francis. Sanders enthusiastically greeted Morales upon his arrival at the event.

A prominent speaker was Father J. Bryan Hehir, who once taught a course at the Institute for Policy Studies called “Matthew, MARX, Luke, and John.” Hehir served on the staff of the U.S. Catholic Conference of Bishops in Washington, D.C., from 1973 to 1992, and now teaches at Harvard. Hehir has explained the meaning of the Roman Catholic Church’s call for a “world political authority” with “real teeth.”

Still another speaker was Jeffrey Sachs, a special advisor to the United Nations and director of the Earth Institute at Columbia University, who has challenged the “American idea” of God-given rights embodied in the Declaration of Independence as old-fashioned and out-of-date.

PASS President Professor Margaret Archer has her own Marxist tendencies, having co-authored a book titled, Transcendence: Critical Realism and God. In the introduction of the book, Archer and her co-authors say of themselves, “The three of us are all academics. One of us is a philosopher, and two are sociologists. Similarly, we are all associated with the political left, the economic or Marxian left particularly.”

Archer was appointed by Pope Francis as the president of the Pontifical Academy of Social Sciences in April of 2014.

Hichborn has commented that since her appointment, Archer “has used her position to invite population-control architects Jeffrey Sachs and [U.N. Secretary-General] Ban Ki-moon to speak at a Vatican event and attack pro-lifers who were concerned about it.” He notes that she participated in an event sponsored by PASS that was “intended to explore ways to indoctrinate children into the Sustainable Development agenda of the United Nations,” considered a means by which global capitalism is to be overthrown and a global socialist order ushered into being.

There was some dispute over whether Archer played a personal role in inviting Sanders to the conference. But whether it was Archer, the Vatican, or PASS, it had massive political significance, as demonstrated by the fact that Sanders posted the letter on his website that highlighted his appearance at the event.

Last August we published a column, “Will the Pope Endorse Bernie Sanders for President?,” speculating that Pope Francis would attempt to put the Roman Catholic Church firmly in the Democratic Party camp in a critical election year during which Republicans were hoping to turn back the tide of transformational Marxism represented by President Barack Obama.

The column noted that an article in the Jesuit publication “America” highlighted the fact that Sanders was the presidential candidate who most often quoted Pope Francis.

While the pope didn’t endorse one candidate over another during his visit to the United States, the official invitation to Sanders for the Vatican event this month has to be seen as evidence that the Vatican approves of his socialist approach, no matter what personal views he holds on religion.

Ironically, the conference that included Sanders was described by some publications as a celebration of the 25th anniversary of Pope John Paul II’s encyclical marking the end of the Cold War, even though communist regimes such as Cuba, China and North Korea still exist. The fall of the Soviet Union was highlighted during the conference.

In this context, Russia continues to be viewed as a “former” communist country, even though it’s run by Vladimir Putin, a former head of the Soviet intelligence service, the KGB.

However, Rep. Devin Nunes (R-CA), chairman of the House Permanent Select Committee on Intelligence, writes in The Washington Times that Russian President Vladimir Putin “may have swapped Soviet Communism for Russian chauvinism as Russia’s guiding ideology, but the bellicose, expansionist impulse and anti-American cant remain intact.”

Nunes admitted to CNN’s Jake Tapper on April 12 that the U.S. Government has badly “misjudged” the intentions of Putin “for many, many years.” He explained that “The biggest intelligence failure that we have had since 9/11 has been the inability to predict the leadership plans and intentions of the Putin regime in Russia.”

After the Russian invasion of Georgia in 2008, he noted, the U.S. continued to engage diplomatically with the Russians, and “we continued to talk to the Russians, and then they invaded Eastern Ukraine,” he said. “We missed that. And then we completely missed entirely when they put a new base, a new base with aircraft into the Mediterranean, into Syria. We just missed it. We were blind.”

Yet, Pope Francis was recently in Cuba, signing an agreement of cooperation with the Russian Orthodox Church, which is widely regarded as being under the control of the Putin regime and the KGB.

It was Francis, of course, who helped the Obama administration normalize relations with Cuba.

It would appear, therefore, that the appearance of “Bolshevik Bernie” at the Vatican is only one piece of a puzzle that demonstrates the involvement of the Roman Catholic Church in a Marxist-oriented New World Order that treats Russia and the forces of international communism as major players. It is Sanders’ role to push the political discussion to the left during the U.S. presidential campaign so that the U.S. offers no effective resistance to a world government based on Marxist principles.