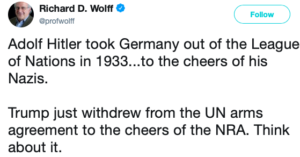 Richard Wolff, who teaches at The New School (a university located in New York City, New York), is a pro-socialist visiting professor at the university and formerly taught economics at the University of Massachusetts-Amherst. Among his many anti-capitalist and anti-Trump opinions, he recently opined that a recent move by the president is comparable to Nazi German dictator Adolf Hitler. In a social media post on Twitter, Wolff said, “Adolf Hitler took Germany out of the League of Nations in 1933…to the cheers of his Nazis. Trump just withdrew from the UN arms agreement to the cheers of the NRA. Think about it.”