Law professors Jonathan Turley of George Washington University and Nicholas Rosenkranz of Georgetown slammed President Obama’s “muscular presidency” as dangerously unconstitutional. The Federalist Society hosted these speakers in a panel discussion entitled, “Suspension of Laws: What are the Limits of Executive Authority?” 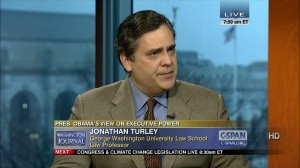 Turley said that President Obama has completely ignored and “circumvented” Congress. After all of Obama’s rhetoric, speeches and subsequent actions, Turley said, “The irony is that he didn’t have to circumvent Congress” to achieve his own goals. As a law professor at George Washington, he could only say, “I’m left scratching my head” in trying to understand Obama’s vision of the presidency. He said, “It’s not that we [haven’t had] circumvention of Congress in the past, [but] it has been accelerating under this president.”

Turley noted that in the last State of the Union address, “President Obama went to Congress and said he intended to circumvent Congress and to act alone in areas where Congress has either blocked him or failed to act.” Turley was shocked by the response by sitting congressional members to Obama’s statement. He continued, “Now that alone was quite surprising, but what was more surprising, [the] rapturous applause [he got]. I look at this body, of both houses, applauding a president who just said he would circumvent them and would act unilaterally…it bordered on self-loathing.” This “self-loathing” and “rapturous applause” by Congress was, as Turley said, “Something the framers wouldn’t have anticipated.”

He worried, “Our system is changing in a very fundamental way, and in my view, is a very dangerous way.” Turley compared the three branches of government, judicial, legislative and executive branches, as ones “held together in a type of orbit…they check each other and create stability through that check and balance system and separation of power.” Today, under Obama, “the executive branch has …aggregated power to the point that it has created instability” in the country. As a result, these actions “can create instability in society” as a whole and Turley said, “That was never what the framers envisioned.” Now, Americans are seeing “the shift of power to federal agencies, which are now exercising judicial and executive power” and a disregard for the long-held belief in separation of powers.

“I have never said that President Obama is a dictator,” said Turley, “but I do believe that what he is doing through circumvention of Congress…he is becoming a government unto himself.” Even as a supporter of his policies, Turley warned, “Once this space expands, the gas will fill it equally” and Obama’s supporters “will rue the day that they remained silent in the face of change in this system.” Why? Turley pointed out, “The next president can do the same” and expand his presidential and executive powers. Then, “it will be hard for people to reject, who were silent today.” It would, he argued, be the “height of hypocrisy.”

During Obama’s terms as president, Turley found, “The most significant…involved changes that were rejected by Congress…and the president responded by carrying out the same decisions or policies under his unilateral authority.” One such example: President Obama’s executive orders implementing the DREAM Act that a Democratic Congress would not pass, the act which gives free college tuition to illegal immigrants.

Rosenkranz said, “Congress repeatedly declines to pass it [the DREAM Act]” and yet, Obama will “behave as if it were [passed].” Some defend Obama and say that he is trying to conserve executive resources, but Rosenkranz said, “In this case, it is quite clear that he is not trying” to do so. For example, “it is free for the federal government” to enforce immigration law. However, Obama went ahead and “exempted millions of people from the immigration law.” In his opinion, “This exemption has a distinctly legislative character” and is “a blanket policy [affecting] 1.67 million people.”

Additionally, Turley said, “The power of the purse has become almost an urban legend or almost a constitutional legend” under Obama. “There’s so much money sloshing around in the executive branch that Congress has lost the power of the purse,” he said. With ObamaCare, Turley said, “[Obama] took $454 million from a dedicated purpose and shifted it over on his own purpose.” With Libya, “Not only did President Obama say that he alone defines what a war is, there was no room for the court, no room for Congress, as long as he didn’t call it a war, it would not trigger the Constitution, but was really unsettling that he funded that war entirely out of discretionary funds. He actually carried out a war without having to go to Congress at all.”

He tempered his criticism slightly when he stated, “It is not even about President Obama; it’s about our constitutional system… [because] this system is changing so fast and so significantly that I don’t know what system we’re left with.” Turley feared that Obama has created a top-down executive government model, in which “that system will be insulated” from popular opinion, also known as Congress. “Congress, with all its faults, is the thumping heart of the Madisonian system,” said Turley. Now Obama has created “the very danger that we hoped to avoid.”

Turley said, “There’s a reason why we’re not getting things done…we’re divided, we’re a divided nation, and Congress looks exactly like the nation.” He defended the role and makeup of Congress because “that’s what Congress is supposed to be; it’s supposed to be a reflection of the public. So what you’re saying is that you want to circumvent” the public. Turley pointed out, “The reason why the President is circumventing Congress is because Congress is divided and cannot get anything done.” He warned Obama’s supporters, “When you argue for a muscular presidency…you have to take note of what that means.”

Based on Obama’s actions, Turley mentioned, “Now, that’s a muscular presidency, it is not the presidency that’s a part of this Constitution.” Today, “there really isn’t a pushback” from Congress because Obama has made the legislative body “a non-entity.” Turley is alarmed by the drone strikes targeting American citizens suspected of terrorist activities abroad. Attorney General Eric Holder spoke at Turley’s alma mater, the University of Chicago, and in Turley’s words, discussed why the government should “vaporize a couple [of] Americans.” He went on to say, “President Obama went further and created a system by which Americans could be taken out by his sole discretion” and without a trial. Turley said, “The president is now asserting the right to kill any one of you by his authority…without a charge…and the result was applause.”

Turley could only wonder, “We are really living in a parallel universe where the president is claiming the right to kill American civilians” and people are applauding his unilateral actions.

Some argue that the Founders [or as he called them, the Framers] did not write the Constitution during poisonous times. Turley responded and said, “This Constitution was written during poisonous political times.” The Founders “didn’t like wars…they didn’t like executives getting us into wars.” Yet, “Look what happened in Libya…we must be reading different works” if you think the Founders would approve of an intervention in Libya.

Rosenkranz added to Turley’s point, using ObamaCare, immigration reform and the IRS targeting scandal as examples of extra-constitutional acts. Calling himself a “textualist,” he focused on the wording of the Constitution. From the Constitution, Rosenkranz read the phrase, “The president shall take care that these laws will be faithfully executed.” He pointed out that the phrase, “’shall take care’…is not optional, this is mandatory.” In his words, “Other folks will do the actual executing, but his duty to take care of the executing of the laws.” Also, “The president does have power to make enforcement choices; However, he has to make them faithfully.”

He gave a background on the reason behind this clause, “English kings had taken power to suspend the law unilaterally. The Framers expressly rejected that practice. That’s what this clause is doing here.”

Rosenkranz, referring to ObamaCare, said that one of the delays of the law’s implementation came via a blog post in July 2013. “I have lost track, the president has suspended or modified Obamacare some, is it 36 times by now, I’ve lost track.” The delays go against the law’s statutes, which he believed “is perfectly clear.”

Yet, the blog post “makes no mention of this statutory effort” and to him, “the blog post raises the question of what ‘faithfully’ means.” Rosenkranz, referring to the delays, said, “This is wholesale suspension of a law” and the President “simply cannot mean to decline to execute the law at all.”

He found Obama’s comments on the delays “particularly troubling.” On August 19, 2013, Obama sought “a change in the law” and said, “He would prefer” some changes. Rosenkranz pointed out that President Obama said he would prefer to pick up the phone and call House Speaker John Boehner to change the law. “The climate was so toxic,” said Rosenkranz, but “the truth though, the President knows it, he wouldn’t even have to pick up the phone.” The House had several bills on the floor, one that would delay the employer mandate and another would delay the individual mandate. Obama “didn’t actually support the bill[s], to the contrary, he actually threatened to veto it.”

Rosenkranz warned, “This is, it’s really almost…the President actually seeming to prefer flouting the law as written, rather than supporting a statutory change that would achieve his desired results. This [seems more of] a willful violation of the [take care] clause.”

And, Rosenkranz added, “this act was enacted years ago…literally, years of leave time, we couldn’t get our act together.” He felt that the failures are “a bit of an indictment of the law itself.” As he said before, “Congress was prepared to amend this law. The President could have [amended it].” “There should’ve been a legislative change [but Obama] actually threatened to veto it.” When asked by an audience member about why Obama would not sign any House bill to delay ObamaCare, he said:

In other terms, “So signing one and vetoing the other” would’ve placed Obama in a “politically awkward” position.

President Obama “is trying to distance himself from the scandal” surrounding the IRS and targeting conservative groups. However, the “take care” clause is a “personal” responsibility for the president to oversee all parts of the executive branch.

Rosenkranz said, “What the President knew and when he knew it, is a certain sense, is beside the point. The point is, he should have known, he should have known it, [it] won’t do that the President erroneously said the IRS was an ‘independent agency’ nor will it do for him that he” found out via news reports like everyone else. “Not knowing what an executive agency is up to, let alone with not knowing that the IRS is a part of the executive branch…” is not encouraging, he said.