While most people would consider topics such as science and math to be essential components of an elementary school education, the principal of East Side Community High in New York City believes students and their parents need to spend more time considering their “white identity.”

Last week, Mark Federman, disseminated a “tool for action” asking parents to reflect on their backgrounds as part of an anti-racism campaign in the district. The Principal’s directive was accompanied by the teachings of Barnor Hesse, an associate professor of African American Studies at Northwestern University, who teaches “Unsettling Whiteness” and “Racism in Western Modernity,” among other subjects. Hesse penned the “8 White Identities” curriculum, used by Federman in his school-wide message, that was developed to “build an ethnography of whiteness” in an effort to combat the institutionalized oppression of minorities. The identities range from White Supremacist, defined as an individual “that preserves, names, and values white superiority,” to White Abolitionist who seeks to “dismantle whiteness.” 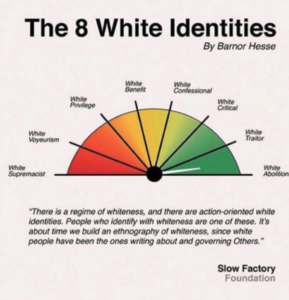 Dr. Hesse’s list of white personality categories were accompanied by a color-coded spectrum which identified “White Traitor” in the green and “White Voyeurism” in the red. Hesse chides “white voyeurs,” who “consume black culture without the burden of blackness,” for their “fascination with culture.”

While parents were outraged by the elementary school’s espousal of critical race theory, the New York City Department of Education issued a statement defending the actions of Federman as follows: “Anti-racism and the celebration of diversity is at the core of our work on behalf of the young people of New York City, and the East Side Community School’s students, parents and staff partner together to advance equity in their community… the document in question was shared with the school by parents as a part of ongoing anti-racist work in the school community and is one of many resources the schools utilizes.”

This move follows a broad acceptance of “anti-racism” teachings that have been approved by the New York City Education Department and academia as a whole. Richard Carranza, chancellor of the New York City Department of Education, held mandatory “white supremacy culture” training for school administrators as part of his push to eliminate “implicit bias” in New York City public schools.

Although parents have pushed back against the perceived indoctrination effort, similar “anti-whiteness” programs have cropped up around the nation in response to the Black Lives Matter movement. One exceptionally alarming example occurred in Philadelphia when children were forced to engage in a mock black power protest and consider “black communism” as part of paying tribute to the Marxist Angela Davis. Students were photographed holding signs that read “Jail Trump” and “Black Power Matters.”

While parents may be surprised at the presence of “white shaming” their teenagers’ schools, public school officials in Democratic strongholds have made a conscious effort to implement these controversial programs in order to provide a head start to local progressives in the ongoing culture war. President Trump took a brave step forward aimed at curtailing critical race theory when he established the 1776 Commission. However, President Biden disbanded the advisory committee and repealed Trump’s executive order that also eliminated funding for racial sensitivity trainings in the federal workforce during his first week in office. With tacit approval from the new administration, critical race theory will be allowed to permeate all levels of education unchecked, threatening the next generation of Americans.