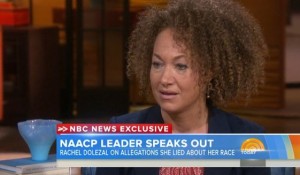 Rachel Dolezal made headlines when it was discovered that she had been identifying as a black woman for years, when she was born as a white woman. She was let go from her job at the University of Eastern Washington and hasn’t found a job since then:

With a new book ready to come out next month, “trans-racial” Rachel Dolezal — the white former Eastern Washington University adjunct and Spokane, Washington NAACP chief who claims she is actually black — recently granted an interview with The Guardian in which she says she can’t get a job … and is depending on food stamps.