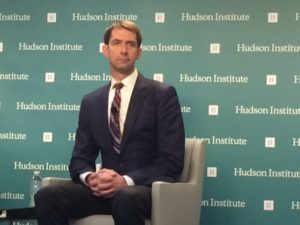 photo taken by Kallina Crompton at the Hudson Institute

Coverage of the use-of-force incidences such as the shooting of Michael Brown, the suffocation of Eric Garner, and the death of Freddie Gray has created an “anti-cop” sentiment in the United States that many, including Senator Tom Cotton (R-AR), deem dangerous for the future.

Senator Cotton spoke at the Hudson Institute last month and took a moment during his address to honor Deputy Sheriff Sonny Smith, an 11-year veteran of Arkansas’ police department who was killed in the line of duty last year while responding to a burglary.

“Preserving the peace takes vigilance,” reminded Cotton. “It takes hard work. And it takes sacrifice — sometimes, the ultimate sacrifice. We shouldn’t stigmatize [the police]; we should thank them.”

Senator Cotton expressed his concern about the anti-law enforcement sentiment because it has fueled a movement to roll back vigilant policing methods that are responsible for the historic drop in crime since the 1980s.

“When professional protestors stigmatize the police as racist knuckle-draggers, a chilling effect on policing is nearly unavoidable. And the result is the disturbing increase in violent crime of the last two years.”

Although crime remains at historic lows compared to the past two decades, criminologists have confirmed that violent crime has been increasing. Many suspect this to be the result of the so-called “Ferguson Effect” in which cops have started to back off from proactive policing due to the public’s bitterness directed at them.

“Black lives do matter,” assured Senator Cotton. “The lives being lost to violence in America’s cities are predominantly those of young black men… But the police aren’t the culprits. In nearly every case, the blood is on the hands of criminals, drug dealers, and gang members.”

After his nephew was shot and murdered, Alderman Jeffrey Boyd from St. Louis said, “We march every time the police shoot and kill somebody…But we’re not marching when we’re killing each other in the streets! Let’s march for that.”

“What should not and cannot occur is a rush to demonize law enforcement whenever force is used,” warned Cotton. “In the absence of facts and hard data, we’re vulnerable to heart-wrenching images, to our own biases, and to cheap demagoguery.”