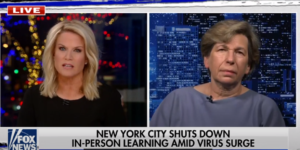 At issue was the announcement from New York City Mayor Bill de Blasio to close schools indefinitely last week. His announcement was a direct response to the city’s coronavirus positivity rate going above three percent. But his decision was met with criticism from parents and education advocates.

Weingarten defended school closures because she believed that schools are not safe enough for students or their parents. “They’re closing now because what the city said and frankly, what lots of other places are also seeing, is a huge skyrocketing increase,” Weingarten claimed.

Weingarten failed to link the increase in the city’s positivity rates to public schools, considering that children and teenagers are generally unaffected by the virus.

Also, the teachers’ union president acknowledged that in-person classes are not “superspreading events” where the virus could spread to significant number of people in a single room or at a single location.