In his newest book, “The Tyranny of Experts,” William Easterly, a former World Bank economist who now teaches at NYU, attacks the top-down economic model that aid organizations and bureaucracies have pushed for decades. He also gives a passionate defense of Friedrich Hayek economics versus John Maynard Keynes and other like-minded economists throughout the years. 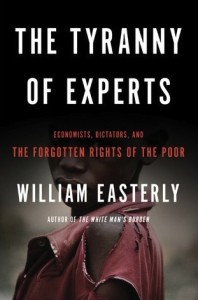 Easterly blasted the odd trio of Bill Gates, former British Prime Minister Tony Blair, and United Nations’ Secretary General Ban Ki-Moon for their actions in Ethiopia. When the longtime dictator Meles Zenawi died and there was an opportunity for democratic change, no one supported the democratic opposition led by a former economist. Instead, the dictator’s supporters won, imprisoned the economist-turned-presidential candidate and turned the first free election in decades into a rubber-stamp election. Yet, Gates’ own Gates Foundation, Blair and Ban Ki-Moon praised Ethiopia for curbing infant mortality rates.

When Easterly took a look at the statistics, he found that the child mortality rates “are notorious for their imprecise measurement” and Gates, Moon and Blair praised results that only spanned a five-year period. He continued:

“The problem is that government-statistics offices in poor countries do not comprehensively record every birth and death in the country – the statisticians either cannot afford it or simply do not try hard enough.”

Easterly said, “Even Gates acknowledges” the imprecise nature of Ethiopia’s statistics on child mortality, which meant that these cited statistics were based on “imprecise fragments of information, like surveys of mothers asking them to recall recent deaths of children and at what ages they died.” The World Health Organization has struggled with child-mortality rates in recent history, with significant margins of error between rates of 65 and 93 per 1,000 births in 2010 and 179 to 209 in 1990.

A major problem for Gates, Blair and the U.N. is that they unwittingly propped up a dictatorial regime in Ethiopia. A Human Rights Watch report in 2010 found that dictator Meles Zenawi, “used donor funds to blackmail starving peasants into supporting his regime, denying donor-financed food relief to opposition supporters.” Also, there are reports that the donors canned a follow-up investigation by April 2011, ignoring the realities of the Ethiopian “Gulag.” One jailed Ethiopian dissident, Eskinder Nega, said he was imprisoned with about 200 other inmates in a big hall, with only three toilets. Yet these realities are not reported or acknowledged by the development community.

Now, The Gambia and several other countries in West Africa (relatively unaffected by the slave trade) have done well without outside foreign aid. For example, The Gambia was unlike other West Africa countries such as Ghana, where “Ghana had Africa’s single highest rate of slave exports per square kilometer of land area” and pitted tribes against one other for decades.

Easterly attributed this dichotomy to the non-influence of the African slave trade, which has affected the likes of Ghana, Cote d’Ivoire, and others. African tribes still harbor resentment toward each other and their former European colonizers, which has only contributed to more instability and inter-tribal conflict and warfare.

In addition, Keynesian economics supporters ignore what happened in East Asia during the 1970s to 1980s. They did not receive significant foreign aid from the West, but countries such as Japan and South Korea (the countries  earned the nickname of “tiger” economies for their rapid progress) flourished because of the free-market principles from the likes of Hayek. Here are some statistics that Easterly mentioned:

The Gambia and East Asian tiger economies provided a stark contrast between top-down, Keynesian economics compared to the free-market, showing how Keynesian economics has not worked in history, yet countries and organizations like the United Nations continue to push for more money thrown at these countries.

Also, Easterly noted how the World Bank and other statisticians change and “revise” their statistics from previous years. However, unlike the World Bank, another set of statistics known as the Penn World Tables (or PWT) makes older versions of their statistics publicly available, which Easterly called “admirable.” But, there are large differences between the two measurements, with Sierra Leone showing a 6.7% growth rate in the 2000s while the World Bank said it was 2.6% for the same time period.