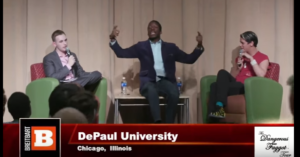 The controversial speaker, Milo Yiannopoulos, was rudely interrupted by a Black Lives Matter protest leader, Edward Ward (a local church minister), who grabbed the microphone away from the moderator. The security guards, who were campus police, did almost nothing to remove the protesters from the event venue.