Planned Parenthood and its supporters have long repeated the mantra that, “women have control over their own bodies,” but what happens after PP helps them decide what to do with them?

The recent release of the three documentary videos titled Human Capital from the Center for Medical Progress, a pro-life organization, provides evidence that PP engages in organ harvesting after abortions take place at their facilities.  In the videos, several actors are disguised as representatives from companies looking to buy unborn fetuses.

“This is not something with any revenue stream that affiliates are looking at; this is a way to offer patients the services they want and do good for the medical community and still maintain access,” Nucatola tells the actors.

It is during these meetings, which reveals the under-the-counter buying, selling of fetal tissue, and the modified procedures in which they may under-go.

Actor: What would you expect for intact tissue? What sort of compensation?

Gatter: Why don’t you start off by telling me what you’re used to paying?

Actor: I don’t think so. I’d like to know what would make you happy. What would work for you.

Gatter: You know that in negotiations the person who throws out a figure first is at a loss, right?

Actor: You know what? If you lowball, I’ll act pleasantly surprised and you’ll know it’s a lowball. What I want to know is, what would work for you?

Gatter: I was going to say $50. I’ve been places that did $50, too.  But see, we don’t, we’re not in it for the money. We don’t want to be in the position of being accused of selling tissue and stuff like that. On the other hand there are costs associated with the use of our space.

After the interviews were aired on TV, pro-lifers have convinced Republican members of Congress members to launch a thorough investigation of the triggered allegations. Meanwhile, Senate Majority Leader Mitch McConnell is leading an effort to defund Planned Parenthood, which received over $500 million in government funding in 2015.

Concurrently, Democrats have been caught up in a furious political storm to defend or deny the organizations actions.

House Minority Leader Nancy Pelosi (D., Calif.) suggested to the Department of Justice, “Let’s have an investigation of those people who were trying to ensnare Planned Parenthood in a controversy that doesn’t exist.”

As Planned Parenthood continues to undergo major scrutiny, it is difficult to say what the outcome will be for the organization. 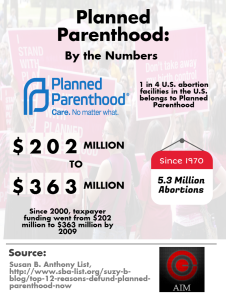