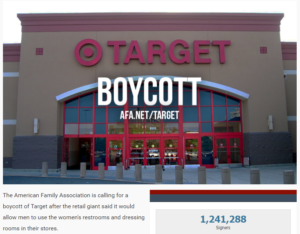 Target Corp. (TGT) stock has plunged approximately 12% less than a month after the organization declared that its transgender customers and employees could utilize “…the restroom or fitting room facility that corresponds with their gender identity.”

Over 1.2 million people have signed the American Family Association’s “Boycott Target Pledge,” in a massive display of consumer backlash against the retail chain. Walmart stock has also declined about 6.9% during the same period making it unclear at this point whether Target’s depressed stock is related to their social policy or some other factor.

Target issued its pronouncement just about a month after the adoption of HB2, a North Carolina law passed on March 23, 2016 requiring individuals in state buildings, including schools, to use the “bathroom and changing facilities” that match their “biological sex.”

This issue has proven politically and culturally polarizing. During her announcement of the DOJ countersuit, Attorney General Loretta Lynch equated the law to vile segregationist policies of the past:

“This is not the first time that we have seen discriminatory responses to historic moments of progress for our nation.  We saw it in the Jim Crow laws that followed the Emancipation Proclamation.  We saw it in fierce and widespread resistance to Brown v. Board of Education.”

Yet Governor McCrory asserts that his state’s law was created to supersede a Charlotte ordinance imposing bathroom rules on private organizations. Tired of being blamed for starting this battle, he stated that “This is an agenda by the far left and for some reason the national media is saying the far right brought this up.”

The Obama Justice Department has now decreed that Title IX in the Education Amendments of 1972 requires schools to cater to transgender students regardless of whether “other students, parents, or community members raise objections or concerns.”

In addition to forcing schools to permit transgenders to utilize the bathroom and locker room of their choice, schools must also allow them to live in whatever housing fits their assumed gender identity. School employees must also refer to transgender students by the “pronouns and names consistent with a transgender student’s gender identity.” The DOJ threatens that any educational institution that disobeys these commands may lose its federal funding. AIM’s Cliff Kincaid explains that the left’s promotion of transgenderism and Lynch’s comments are linked to Cultural Marxism.

This campaign to normalize transgenderism represents a new frontier in the left’s quest to transform society. And as this debacle has already demonstrated, the government will demand that all Americans submit to this cultural revolution.