The John William Pope Center’s Jay Schalin recently published a report detailing the decline of America’s college English departments. More and more, traditional English literature classes and other similar icons of the English language in academia are disappearing. Many of them are replaced, or supplemented by, “digital humanities,” “media studies” and the like.

English majors at UNC have to take courses from several time periods, but instead of focusing on literature, some of the course titles are “Medieval and Modern Arthurian Romance” or “Renaissance Women Writers,” and “Southern Women Writers.” An additional course, “Another Country: Homoeroticism in British Literature,” is an option for one of the latter time periods required by the university, which does not include electives such as “The Challenge of Queer Theory to Literary Studies,” “Children’s Picture Books,” and “Latina Feminisms.”

Schalin included a chart detailing which universities require Shakespeare as a part of their traditional courses: 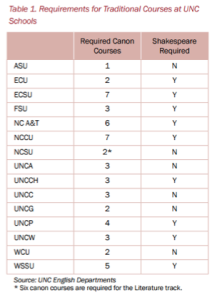 Schalin noted how English departments have become increasingly politicized and how “the political left rules the English discipline.” Specifically, Schalin he discovered:

Adding to English departments’ woes, Schalin found, “Nationally, between 1971 and 2011, the percentage of all bachelor’s degrees conferred that were in English fell from 7.6 percent to 3.1 percent, according to the federal government’s National Digest for Education Statistics.” Yet, as a whole, colleges have seen declines in other subject areas such as social sciences and mathematics. Schalin also noted, “Mathematics degree-holders fell from 3.0 percent of all degrees in 1971 to 1.0 percent in 2011, and social sciences graduates fell from 18.5 percent in 1971 to 10.3 percent in 2011.” There is an increasing rise in “vocational-oriented degrees,” as statistical guru Nate Silver pointed out (Silver is an ex-New York Times statistican-turned-ESPN-statistician). Schalin concurred, nothing that “Business degrees rose from 13.7 percent of all degrees conferred in 1971 to 21.3 percent in 2011; bachelor’s degrees in health care professions nearly tripled, from 3.0 percent in 1971 to 8.4 percent in 2011.”

Salaries and employment also play a large part in the decline of English departments, where Schalin found the following: 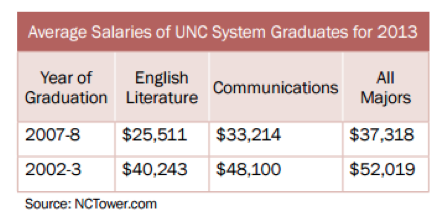