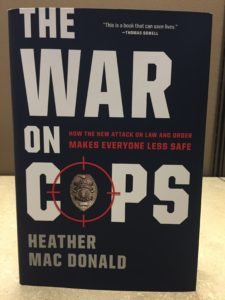 In light of the violent Black Lives Matter (BLM) rhetoric, protests and the murder of five Dallas police officers, Heather Mac Donald’s book, The War on Cops, rebuts much of the BLM and anti-police rhetoric promoted by the Left.

Mac Donald, a fellow at the Manhattan Institute who has extensively researched decriminalization, family and crime, disassembles the Ferguson-Black Lives Matter-Michael Brown propaganda from the Left. The oft-raised liberal media rhetoric of Ferguson having a predominantly white American city council ignored the reality that the town did not go out and vote, as the mayor ran unopposed. Also, she points out that the traffic citations do not unfairly target black Americans because many have expired registrations and licenses and at least one study shows that young, black male drivers tend to drive faster and violate more traffic laws than their counterparts.

She outlines the physical evidence that contradicted the liberal media narrative, making it clear that several witnesses saw Michael Brown attempt to reach for Officer Darren Wilson’s sidearm. She blasts the Department of Justice’s unilateral measures which were based on these liberal, anti-police falsehoods. The only “smoking gun” for the department was a series of racist, immature e-mails between police officers, but not much else.

One of her better points was that the Washington Post found “press documentation of 258 black victims of fatal police shootings in 2015, most of whom were seriously attacking the officer.” She continues and notes how in 2014, “there were 6,095 black homicide victims … which means that the police could eliminate all of their own fatal shooting without having significant impact on the black homicide death rate.” Mac Donald avers, “The killers of those black homicide victims are overwhelmingly other blacks – who are responsible for a death risk ten times that of white in urban areas.”

In undressing the Washington Post’s own unarmed-shooting-by-police-officers report, Mac Donald finds that of the 987 victims of officer-involved fatal shootings, “50 percent of those victims” were white and 26% were black. Regarding cop killers, 40% were blacks, and she claims that the majority of 258 black victims were armed, as well as white and Hispanic victims. The Washington Post’s definition of “unarmed” is spotty, as Mac Donald notes that it doesn’t account for the situation adequately. For example, the victim could be unarmed, but it didn’t mean the victim did not attempt to seize the officer’s sidearm, or the victim did not beat the police officer with his or her own sidearm or equipment. Additionally, stray bullet victims were included in the “unarmed” category and Mac Donald points out that there were several victims who attempted to seize the officer’s sidearm and accidentally discharged it. Mac Donald concludes, “Someone who is fighting for a service weapon represents a lethal danger. Race has nothing to do with it.”

Homicide rates have increased, but haven’t reached record highs from the 1960’s or in subsequent decades. However, Mac Donald notes that the previous 20 years saw decreases of crime, but now, that trend is reversing. For example, shootings in Chicago have increased by 24% and homicides 17% by May 2015, compared to the previous year.

Mac Donald debunks the oft-cited liberal narrative that taxpayers haven’t invested in poor urban cities such as Baltimore and finds that taxpayers have put at least $22 trillion in urban revitalization and crime-reduction initiatives since the War on Poverty began in 1964, citing a Heritage Foundation study. Also, she points out at least $130 million was poured into Freddie Gray’s Baltimore neighborhood in the 1990s, to no effect.

She is not a fan of stopping New York City’s ‘stop and frisk’ program, as well as decriminalization and releasing lower-level drug offenders in places such as California and presents valid arguments against releasing criminals back on the streets.

Overall, it is a detailed, data-driven book on the ‘war on cops,’ along with appropriate anecdotes and stories, making it is a worthwhile investment of time to read it and become better informed, although that would rule you out of contention to be a talking head on CNN or NPR.