Three universities contributed to a study that shows that children are faring badly in the Obama years, although they stop short of questioning the official unemployment rate.

The 2015 Kids Count Data Book, published by the Annie E. Casey Foundation found that “In 2013, nearly a third of children (31 percent) were living in families where no parent had full-time, year-round employment. The child poverty rate has remained stubbornly high. At 22 percent in 2013, it was still several percentage points higher than before the recession.”

The report goes on to note that “In 2000, 9 percent of children lived in census tracts where the poverty rate of the total population was 30 percent or more. That figure rose to 14 percent for period from 2009 to 2013.”

Moreover, “In 2013, one in four children, 18.7 million, lived in a low-income working family in the United States. This is 1.7 million more than in 2008.”  The University of South Florida, the University of Hawaii and North Dakota State University all provided data for the report, along with a host of children’s advocacy groups around the country.

Nevertheless, despite the far from cheerful findings enumerated above, the report makes references to “economic recovery,” “jobs created,” and “job growth.” As we have noted, the labor force participation rate is the most dismal in decades, a trend which goes with the third of children whose parents lack full-time unemployment found by the Casey Foundation. 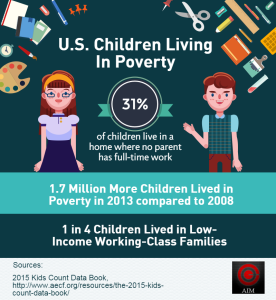