Home Perspectives Why Does the Cold War Matter Today? 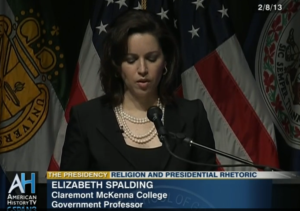 image via screenshot from CSPAN video

“Those who forget the past are condemned to repeat it.” On May 3, 2016, Elizabeth Edwards Spalding, an author and associate professor of Government at Claremont McKenna College, repeated this quote while discussing her newly published book “A Brief History of the Cold War.” Spalding wrote the book in hopes of educating people on the tyrannical nature of communism, a lesson she claims more educators neglect.

Most people see the Cold War as a power struggle between the East and the West who simply “misunderstood each other.” Spalding emphasizes, however, that the cause of the Cold War was more than a few misunderstandings; it was about the nature of the regime. She says, “The Cold War was a conflict between two ways of life…theism and atheism, capitalism and communism, democracy and tyranny.”

Reagan believed that “The loss of freedom anywhere, was a loss of freedom everywhere.” Spalding praises the efforts of Reagan because he not only pointed out the flaws of communism, but he built up America by increasing pro-freedom public diplomacy. Reagan made it known that centralized control destroyed innovation. His doctrine forced the Soviet Union to realize it could not compete with the U.S.

Although Reagan set a high standard for the spread of democratic values, Spalding laments the growing number of academics who believe that the nature of the state does not matter. According to Spalding, people need to understand that “Communism crushes the individual and his rights… Leadership and statecraft matter.”

Interestingly enough, Spalding discusses the threat of Vladimir Putin based on his history: he was born in the Soviet Union, he was a KGB officer, and he has a goal to make Russia greater. Although Putin may not be the next Stalin, Spalding warns that “there is something about the cold war that goes into [Putin].”

America faces many challenges today: the threat of radical jihadists, the Syrian refugee crisis, and the increasing military power of Russia.  In order to solve these issues, Spalding makes one advisement: “We must understand the 20th century in order to understand the 21st century.”