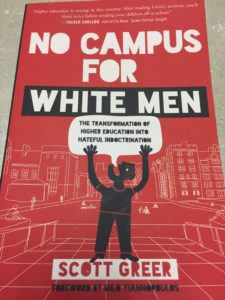 In the book, No Campus for White Men: The Transformation of Higher Education into Hateful Indoctrination,  Scott Greer, an editor and columnist at the Daily Caller, outlined how left-wing identity politics have created today’s volatile on-campus environment and the liberal narrative that white men are terrible people. In his reporting, he has found that identity politics, such as separating groups based on race, ethnicity, religion and socio-economic class, are at the core of the Left’s college campus indoctrination.

Greer cites the following policies as key to that effort:

Greer notes that nearly 50% of America’s colleges have free speech codes, which limit the expression of free speech and how almost 40% of Millennials favor government prohibiting viewpoints that could offend minorities. He also quotes fairly credible studies and reports at odds with the 1-in-5 college women sexual assault statistic that the Left has used it to create a dogmatic, repressive college atmosphere.

Greer’s book is a worthwhile read to update one’s colleagues, friends and family on what is going poorly on America’s college campuses.